Has anyone sorted that bog issue out? I was thinking of running a y pipe and maybe getting a programmer to lean the sucker out on the bottom. At least once a ride I have it bog in a spot and I get stuck from it, always in a dire moment where you need all the beans. (Yes my reeds are new) 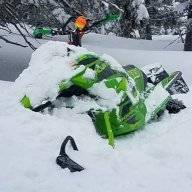 The low end bog when my engine was warm was driving me nuts for 2 seasons. Last off season I installed a Speedwerx Stage 3 kit (pipe, can, head, clutching, reeds, programmer, adjusted power valves) and a different intake along with moving the temp sensor, hasn't bogged since. I know thats not much help, but something or combination of things fixed that engine.

I hear ya on bogging at unfavorable times, that was the worst part.

Did you try unplugging the throttle safety switch?
T

I have the same issue. Disconnected throttle safety switch, and it’s still there. Tried stock can and a GGB trail no difference, still there.
My sled is a 2017 XF8000 High Country 153”. Love the sled, but the bog has got me in trouble a few times. If we could just find a fix? I ride low elevation less than 3000 ft. Might try relocating Intake Temp sensor?


Sent from my iPad using Tapatalk

You might try an advanced timing piggy-box controller like AC did for the Suzuki 800 HO hill climb racers?
J

Just add a turbo!
A

for years now Ive heard of the bog but yet to experience this one I read and hear about from a buddy. they bog when going down steep hills, that can be annoying. Diamond S made their exit pipe too long so I was getting a bog in deep spring snow it couldn't blow out of the way sidehilling. the TSS is picky if you grab throttle funny. other than those times, when does this occur? maybe checking cable adjustments (throttle, oil, APV) and not letting the clutches get dirty and fairly new belt keeps it away? I hear complaints of major bog from an '18 owner, in deep pow and also something in secondary went bad ruining backshift.
T

I have seen my oil pump not return all the way in the garage while checking things over, but it returns when i snap the throttle.
Is there any other way to fix without replacing oil pump? I figured it would free itself up over time. 600 miles on sled now.

therookie said:
I have seen my oil pump not return all the way in the garage while checking things over, but it returns when i snap the throttle.
Is there any other way to fix without replacing oil pump? I figured it would free itself up over time. 600 miles on sled now.

Sent from my SM-G950W using Tapatalk
Click to expand...

On my machine I traced it to the motor clutch slamming in. I put a 911 cover on, loosened the weights enough so they would free fall as I rotated the clutch. I keep the belt clearance less than .0020, and keep the belt tight.
I have since then put on a softer engagement spring (engaging around 3000) and still no bog.
C

would like to add my temp sensor is relocated aswell, might just deal with it another year and get that new banger kitty 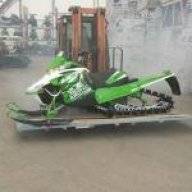 I moved the air temp sensor after I got mine new 14 HCR, made the bog worse, wouldn't even run, completely worse. Added more air also, and bog disappeared. I found that the bog was all to much fuel. Picked up an 09 M800 for the girlfriend, very, very very rich also, very boggy. Added one 2 inch Frogskin to the airbox, major improvement. Ended up putting a total of 2 on the front, it was a brand new sled after that and plugs were a nice chocolate brown.
the power and torque was awesome, and no bog at all..
T

How did you add more air to your 2014 HCR. Bulleyes, frog skin? What location?

Im not sure what hood I got on mine but more air didnt help, new reeds too , also ceramic coated pipe

I added the Frogskins in the same places that Speedwerx did with there kit. On the nose, so it acts like a ram air, under the front bumper, on top of the nose and either side in the front. Both left and right sides, just where the hood fits in.
You must log in or register to reply here.
Premium Features