2011 where's the best snow in Sask this year

I don't put a ton of miles on each year,but I like to think that they are quality ones. Yorkton north & east not to bad to play in but saskatoon sucks:face-icon-small-fro. Anyone else find the Big stash yet? Don't really care about trail conditions.Just like to play in the coulees and find some deepish snow. 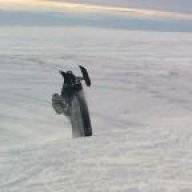 no trail system or nothing but at home in southwest sask by cypress hills they have been getting pounded with snow, Half of the municipal roads are closed cause they haven't been plowed. i'm headed there for a derby in 2 weeks cause they have accumulated more snow this month than there has been here in the southern rockies. a 3 feet of snow on the level
B

Prince albert area and surrounding has about 2 feet or so. cant say what this warm weather did up there on mon/tues though.
S

I was out north and a bit east of Cupar(north east of Regina ~75km). It was amazing, best snow I have seen in years. Fields had a foot of soft snow, we found areas where there was 2'+ of soft stuff. We got stuck a few times while playing. Got off our sleds and sunk to the crotch.

I talked to some people from the Melville area and they say it is the same.

It was really amazing. All around Regina, snow has turned to ice, we had some warm days a couple weeks ago. We have hard icy drifts. Things got better as we headed to Cupar. Drifts did not look so icy. Around Cupar there were drifts, but not as hard as around regina. You could ride across fields at a pretty good clip. Once in a while a hard drift would shake you up.

We got into these rolling hills and the snow was great, no drifts and at least 1 foot of powder. Since we were there, it is all I can think about, how to skip out of work and get back there. We had a local guy with us and he toured us through some great areas.

Apparently there is a rally in Dysart this weekend. Dysart is like 5 miles east of Cupar.
You must log in or register to reply here.
Premium Features