You people are welcome ANYTIME in CO!

You are using an out of date browser. It may not display this or other websites correctly.
You should upgrade or use an alternative browser.
R

More tomorrow, I'm tired, but I need to thank some of our Iowa-members.

I put my Skandic in a creek today @ Rabbit Ears in Colorado.

Huh. Predicament. Not sure what to do. Long story (will type it all up tomorrow), but long story short, a group of guys from IA showed up, dropped everything and made a bad situation a WHOLE LOT better.

Thanks! Now, just in anticipation of the "what a moron!" comments, the camera is roughly 6" above my eyes. I knew the creek was there, but I _thought_ it was the depression in the snow about 100' before...the creek.

The creek is clearly visible in the video, did not even begin to see it with my eyes. oops.

I'll type more tomorrow, with pictures of the damage (thigh, meet handlebar, steering post BENT), went to the er, just in case (HUGE swelling), all is right in the world....but without new friends from Iowa, I'd still be digging that thing out. 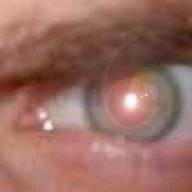 Looks like Dumont Lake? Yeah you have to be careful around there in marginal snow conditions, you aren't the only one who has dumped a sled there

I'm not saying I have, but I've been with people who have hahahahah
R

I THINK it was Fishhook Lake, actually. I don't know the area well at all; I normally drive around to Dry Lake. This time, I parked at Muddy Creek, rode through the lot, through the woods, across the field, hit 1A at an intersection - left was 1A, north from there. Was riding 1A to connect to the hybrid-area for skiing; recon mission to determine if it is in fact faster to ride from Muddy Creek/Dumont to get to the skiing area vs. driving around.

Going to drive around next time - the grooming ended just past the towers, turned left on what I believe to be RCR38, but not sure. We eventually gave up on the idea and just explored (was with my daughter).

Where it happened was on the east side of 1A a few (3-5?) miles north of the split near Muddy Creek. There was a lake on the west side of the road, this was 300' off the east side. We were riding back to the truck, I was goofing around on the Skandic and the XM; this time, I'd taken the Skandic out for a spin while the kid sunbathed. Snow in this field was set up enough that the giant Skandic was not really sinking in - fun, but ehhh. When the snow is DEEP, the Skandic is actually a riot to carve around on. If it is not deep enough, it just drives around. I was planning on going back, crossing the creek, turning left, finding kid, head to Kremmling for a late lunch.

The video tells the story, found the creek. TOTALLY misjudged - the creek is exposed in spots, covered over in others. I thought I'd crossed it on a covered spot. Alas, no.

So, all of a sudden, bam, I'm in the creek. Skandic was BURIED. Kid is 300' away, on the trail, on the XM - pull start. She, as of yesterday morning, could not start the XM by herself. Huh. Predicament. I tried the phone - nothing. Eventually, I put skis on & started walking back toward the trail - as I was doing that, once I got out of the hole, she could hear me & the guys from Iowa showed up. I asked the guys from IA to go get her sled started, figured I had a dig ahead of me.

Nope, troops deployed. One went and got her (she'd already gotten the XM going, I *knew* she could....), the rest started digging.

HUGE help. At the time, my leg did not hurt, really - I knew I'd have a bruise, but adrenalin and whatnot, things were good. I did not catch names, but one told me to calm down a few times, third time, ok, I'll listen - *I* thought I was fine, but clearly, he did not. So, I did.

These guys were an ENORMOUS help. In town for a few days, they dropped everything, helped get the Skandic out of the hole. We dug for a few, they had a snobunjie, I had one, someone produced a 2.5" strap. Three good tugs, it was up the (steep) ramp, then out.

It was a slow ride out, handlebars got bent pretty badly. Or, the steering post. I called the shop on the way down, dropped it off first thing - at that point, I KNEW I'd not be up to doing it today, wanted to get it into the shop to assess damage, have it back up and running asap.

Turns out, I'm fine this morning, Bruise is bigger, have a blister (?????), but overnight was GOOD for the damage. Hurt like crazy on the way down.

I _REALLY_ appreciate your help! Sorry I did not get your names, but wow, thanks. It was not life-or-death, worst case, it'd have been an easy trek on skis to get to the XM, then a WHOLE LOT of digging - my daughter, while awesome, does not possess the strength of 6 (or 7?) guys from Iowa. I'd have had to dig a LONG ramp ahead of the sled and try to ride it out. I _THINK_ I could have gotten it out with her help, but it'd have taken a LOT longer. I'm not really sure how long it took, but it felt like 15 minutes. Probably 30-45, but doing it alone would have been measured in hours.

And...by the time I got BACK to the truck, it hurt a LOT. I'm not sure how effective I'd have been digging in that state.

Anyway - thanks a LOT. The snowmobiling community always impresses me; I've played a lot of outdoor games, and none compare to snowmobilers in terms of helping each other out.

Leg at the truck - 1ish hour after the impact:

Leg at emergency room. The pink line is not lighting weirdness, I think that's the indentation from the handlebar - it is even more lovely this morning, but I'll spare you:

I always stop to help people out, will continue to do so. I've never come across someone clever enough to do THAT, but I learned a lot about extracting sleds from creeks. These guys were good. 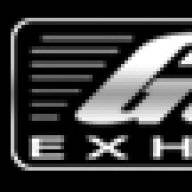 That would not have been fun to dig out. Glad to see everything come out ok. Looks like that will be a little sore for awhile
S

Those Iowa guys, Curt, Marlo and the gang have logged thousands of miles out there. Trust me, us Iowa guys have plenty of experience digging out! They are a great group to have around. I'm guessing between the 17 of us out there this week, we probably had 50 dig outs. 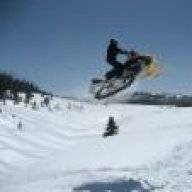 I wonder if it was the same crew I seen on the Flat Top's Sat the 28th?
R

rocks rev said:
I wonder if it was the same crew I seen on the Flat Top's Sat the 28th?
Click to expand...

A) Staying in Walden
B) Clearly knew how to ride
C) Mostly on Skidoos (if not all)
D) Were not fazed at all at the prospect of exorcising the Skandic from the creek.

Leg still hurts. I dropped the sled off at the shop Friday night - the steering post took all of the damage, everything else appears to be OK.

SUPER thankful. Maybe someday I can return the favor. Will certainly pay it forward.
S

I said it before Flatlanders can ride and get unstuck lol. Glad your ok!
You must log in or register to reply here.