You can tell your friends that you saw it here first.

You missed the part that JB says he will die before he gets off the treadmill. That's my most motivational line. It's another one I watch while I am working out.

J'Den Cox qualified the USA for the 86kg weight group for the Olympics this weekend in Mongolia. NICE!!!
S

Storely is in the news again.

Dana white has some TV show where he goes around to little fight venues looking for the diamond in the rough.

He was at a SoDak event and they showed some kid with a sweatshirt that said StorleyStorm.

Anyone going to get the Bellator pay per view with Fedor?
I want to watch the Aaron Pico fight. WICKED tough kid.

He skipped high school and college wrestling and went right to Senior/world level wrestling. He's a bad dude. And he's like 18 or 19. Met him at the US Open in 2014 when he was about 15 or 16.

A couple years ago he was asked about his senior level ambitions...and he clearly stated that MMA was his destination because he just likes punching people in the face.
So his first fight...his MMA debut, is not against some other rookie amateur...it's against a contender. A professional!!!

First round stoppage in his Bellator debut.
6-0!
P

Heck yes! Storley is gonna be big. Good for him!

Next fight, a week from tomorrow. April 13
http://www.bellator.com/events/8cgddf/bellator-197-chandler-vs-girtz 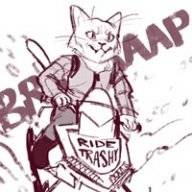 Pretty hard to out wrestle a four time NCAA All-American.

His takedowns were GREAT!
He finally found his power in the ground and pound. I was worried about him throwing his arms out with all those rabbit punches, but he found the elbows and brought the HP.

HE LOOKED GOOD!
You must log in or register to reply here.
Premium Features