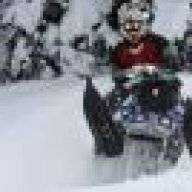 Just thought I would give you my side by side comparison of the sleds on boost having had experience on all 3. The XM was a 2015 Snow check 174, the Polaris was a Snow Check 174, and the Doo was a Snow Check 165. Sleds tested were all Impulse Turbo Boosted. All were tested in various snow conditions in elevations ranging from 8K to 12Kish. Boost was at 8 to 12lbs. All 3 are stock other than the turbo system. No modifications were made to the skid or suspension. I have been riding turbos since 2005 and have owned several brands and have thrown a leg over most. Recently, I have only been riding the Impulse Turbos because the fit and finish is unsurpassed, the parts are of the highest quality, and the customer service is hard to beat. Now, with the background out of the way, here is how I see it....


Flickability: In order of easiest to least flickable.. 850 Doo, XM, and Poo. The Poo, however, holds a very stable line when in the side hill. The XM wants to either dive or wheely with the slightest of weight change on the board. The 850 is somewhere in between.


Trail ride: Not that I care, but the Poo has the best trail ride with superior shocks being the culprit with the remote clickers. 850 next then the XM


Climbing: Boost for boost the Polaris seems to climb the best. The XM actually out climbs the 850 only because it likes to wheely like crazy. More power but a lot of power and control are lost. We are, in fact, ordering Baker skids for the 850s to see if that helps. The Poo settles in nice with very controllable ski lift, more than I would like however, and the XM is very close behind.


Clutching: Based on belt wear, heat, and boostability the Poo is 1st, then the 850 is close behind with the XM coming in last. Both Doos will create twice the heat in the same pull as the Poo, measured with a heat gun. However, I put 500 plus miles on a boosted XM on the original belt!


Things I hate:
Poo.. Toe loops, no tether, and ridiculous wiring connectors. Someone is going to sue them over the first two. Connectors are so ugly and archaic that they have to be held in by grease and covered up by some weird Velcro sock. Too much money to pay for a sled with such cheap connectors. Low oil sensor must be in the cap! Every time I tip the sled or climb anything of significance, I get the red low oil light. Also, because I use the brake a lot will side hilling, I had to get used to the little red brake light that comes on every time I tap it. Ice scratchers are weak, I actually put XM ones on..


Doo 850:
No 174?!! Ya I know, next year... Wheelies constantly making extreme chute climbs very sketchy. I think a longer track would fix this, but the sled is a little too twitchy. Fairly thirsty compared to the other 2. That gauge is way to small to effectively read while riding. Fuel tank is smaller than the other 2.


XM: Loves to eat reeds if you don't watch the R's. It is a tractor and runs with a more torquey feel and less horsepower.


All 3 need extros!! Why can't they sell them on the sled already. They all ratchet with mild power and changing out drivers is a pain in the butt that I just don't think should be necessary.


Poo... very predictable side hilling and climbing, with a great balance between rider input and flickability. Love the bars and seat relationship and general rider ergonomics. Suspension is awesome. Clutching is spot on with Tri City's turbo setup. Seat is a perfect height for me with the tall bar setup. I'm 6'1" and weigh around 195. Best looking sled IMO. Skis work great. LOVES Boost!!! This sled is bar far the easiest to run higher boost levels. Big fuel tank. Dry weight..


Doo 850... Most flickable by far... almost too much so. Great power that feels like it edges out the Poo boost for boost. As I said earlier though, we can currently run more boost in the Poo. Lightest "riding" sled of the three, or in other words it feels the lightest at the bars. Was the easiest to turbo as it had surprisingly good room in there. Great power and torque.


XM... It is a tractor and just keeps on going. Will often climb more things than the rider will give it credit for. Like I said, will out climb the 850, though it might happen a little slower. Great on fuel and reacts very well to rider input for a 174. Both Doos have great fit and finish with awesome accessories and storage options.


I'm sure I missed some stuff so feel free to ask. This is a good baseline though. Not here to bash any of them as I honestly love all 3.

Adding things as I think of them

GPS on the Poo.... I don't know how to use it yet but I love it! ;-)
Of the three, the Poo is by far the fastest reving on Boost. Kind of crazy actually

Better give you vids of all three. Sorry for some reason the Youtube link isn't working. Maybe somebody can hook us up with the link.

C
850T and a crappy snopack