What happened to my EVO today? It pooped out and would barely run. Any ideas?

Ok, so here is the full story:

In the fall, bought a holdover 2019 EVO. Not RMK. Pre-mixed the first tank like I'm supposed to. First ride, only went about 20 miles, so I even pre-mixed the next fillup. Next ride, again, only went about 20 miles. Then last night I installed the better throttle from the evolution kit. That gets us to today. With that half tank still left, I send the kid out. He loves it with the new throttle. Lots more power. He is shredding around, playing in the trees, having a blast. Then the engine starts to be dumb so he gets out of the trees and starts to drive back to the trailer and eventually it just quits and he assumes he is out of gas. Honestly, maybe he was. The gauge on the thing sucks. It shows bone dry when you still have like 3 gallons left. So I put in 5 more gallons and now it shows a quarter tank. Now there is no more pre-mix in the gas, so now it's just pulling oil only from the oil tank. So starting it up is a beast. It seemed to have every indication of being flooded. But did it get flooded by running out of gas? huh? I don't know? Then, once we get it up and going, we let it idle for a long time just to make sure it isn't flooded anymore, but when we give it enough gas to make it go, it just wants to die instead. We can let off and let it idle, but it just won't go. So I tow it back to the trailer and we go have fun on other sled. Later, pulling it into the trailer and then again swapping it into a different trailer, it seemed to have its pep back. But it's hard to tell really just pulling it into the trailer. But earlier, it wouldn't have even gone enough to get it up in the trailer.

In case it matters, it was a nice warm sunny spring day. 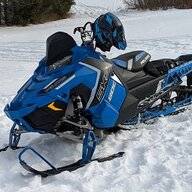 What happened to my EVO today? It pooped out and would barely run. Any ideas?

Evo upgrades so easy even a sales guy can do it. And hopefully not tons of money either.

F
Trying to get to the bottom of the issues with my sled..