What do you love about your Arctic Cat Alpha? 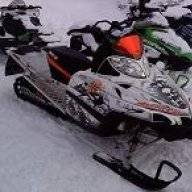 As we gradually work towards the end of snow season, a great time to reflect on those things that you really love about your Arctic Cat Alpha........and go! 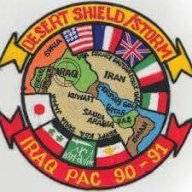 It's just so fun, a very playful sled. Crosses tracks very well and the track has killer hookup. Really impressed with the power from the 800CTEC, feels stronger than my 800 etec's and only burns a bit more fuel and less oil. 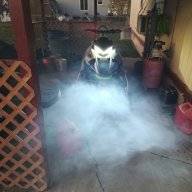 How easy it is to ride overall, and how hard it is to get stuck. The e-start is pretty nice as well.

It's pretty easy to ride, and the traction is unreal!

In good snow:
I love the track and the maneuverability of the monorail. The whole sled handles very well.

The handlebars, Not sure if i love them but when i get off a Polaris, i am very happy to have Cat bars back in my hands...
I am very happy with the clutching performance.
I love how long the belts last! (Longer than the clutch!

)
Can't forget about the LED headlights.... them is nice.

the track/traction in deep snow makes the alpha a new dynamic....with a 900, no turbo would be necessary, especially with the factory turbos likely to put out about 30-35 hp at altitude, a 900 would be nearly the same, and with the more efficient drive train, especially if combined with a belt drive, the alpha would be giving up nothing to the doo....and it would be lighter, and probably more reliable long term than the turbo..
Last edited: Mar 21, 2020
B

slyrydr said:
the track/traction in deep snow makes the alpha a new dynamic....with a 900, no turbo would be necessary, especially with the factory turbos likely to put out about 30-35 hp at altitude, a 900 would be nearly the same, and with the more efficient drive train, especially if combined with a belt drive, the alpha would be giving up nothing to the doo....and it would be lighter, and probably more reliable long term than the turbo..
Click to expand...

i would like to see some sort of reversible scratchers.....and a bit lighter steering when off power....i didn't care for the "no windscreen at all" approach on the 20's, and put a 19 back on mine, reason being branch protection for windshield bag/instrument pod/wiring on handlebars....i would like to see a slightly longer seat (1 inch, no more than 2) with a bit more storage...maybe a little more thought into the sled graphics with more color choices...with the decreased oil consumption, i don't need to ride with enough oil to last half the season, and make it so i can see how much i have with out guessing/hoping i have enough when the idiot light comes on...a designated place under the hood for an extra belt...no battery start system would be awesome....and a nice looking blonde to tuck me in at night..
S

and Cat....it's just plain dog $hit i have to spend 4 hours dis-assembling, sealing and re-installing the air plenum in order to keep snow dust and water out of the intake track every time i buy a new Cat, which is practically every year..
A

Hmm 3" just keeps on a truckin , first day I was able to get it off the trails since we have had little to no snow all winter till this week, really flickable so when I over muscle it it kicks my azz, you stand high enough so when it spits you off you clear the bars and hood (lol) power since out of break-in is awsome , clutches seem really spot on , even on trail manners are no worse than any other MTN sled , not really happy about the fact they made it into a Polaris when it comes to on trail overheating !, a small heat exchanger in the back would cure it ,Although running ski mounted scratchers as well helps and being out of break-in has also helped along with water wetter and a completely full coolant bottle . Other than that and me skipping 2 complete generations of cat chassis having to learn not to hoss it or it will spit ur azz it was a a blast today in what deep we could find !!

I liked it when it didnt fall apart....I would like for AC customer service to return one phone call. I would like if my dealer could get my sled out of the shop as its been there since early February.

I really enjoyed the sled and there is nothing like it in the deep snow. Now when the snow is set up at all the sled does wash out a little and the RMK is king here.
The track is unreal in how it get on top of the snow and it will outclimb any stock sled with ease. More power than any stock motor I have ever had.

Unfortunately for me I cant wait to get rid of it and never buy another Textron product or step foot in the AC dealer in my town ever again after how I have been treated by both parties. It took al ot for me to switch from Polaris and maybe my experience is far from the norm. It sucks to spend 14k on a sled I have not been able to use for more than half the season with no end in sight.
E

That's a tear jerker for sure. I heard the Artic Cat factory has been a ghost town since they sent the last of them home in early Feb. But I sure agree with you that kind of disrespect I would not be back to buy either. What happened to your Polaris that you came over to Cat.
G

I wonder if the support would be better on a Yamacat? Would love an Alpha, have a great local dealer, but Textron scares me.
R

el__gato said:
That's a tear jerker for sure. I heard the Artic Cat factory has been a ghost town since they sent the last of them home in early Feb. But I sure agree with you that kind of disrespect I would not be back to buy either. What happened to your Polaris that you came over to Cat.
Click to expand...

I love my Axys but as I have a very aggressive riding style i was bending a arms often, my tunnel was kinked, and I had this thought in my head I needed a more solid built sled. Well I could have not been more wrong as the AC hardcore did not step up to the the plate and disappointed me in that regard.

I have leaned as well I should have just changed my riding style and approach to being A little less aggressive. I would have a new 850 Polaris in the garage and most likely been riding more this winter.

With how AC has treated me and from talking with other people I can’t even imagine how they will stay in business. 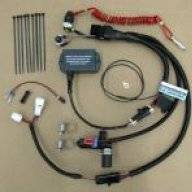 2018 Mountain Cat, mods include an Alpha conversion kit, precision tune, Diamond S Ti can, added EVOL/Hygear chambers and had shocks re-valved for my weight/riding style.
Got about 900 miles on it with twin rails and another 500 or so with Alpha kit.

The track is awesome, so much traction especially in deep snow. I'm not into extreme hill climbing, but I like how you can back out of the throttle and then get back on it again and the track will just hook up and go.

I do like the handling. At first I wasn't so sure as I had a hard time keeping up with the sled. It's so quick reacting that sometimes when side-hilling it would just shoot up hill on me when I wasn't expecting it to. Ended up dropping the front skid shock pressure to tone it down somewhat and learned not to over-correct as much. Like most sleds I have owned, the more miles I put on it the more comfortable I get with the machine.
On the trail ride in, it seems to handle about the same as it did with twin rails.

It has plenty of power, seems like anytime I need more I just pin it and there's more on tap.

Most of the sleds I have owned, I have played around with the clutching some. This one seems to be pretty well dialed in from the factory and I'm still running the original belt.

So far it has been reliable, only issue was a leaking water pump seal which was covered under warranty. The sled came with a 3 year warranty and I've had no issues with coverage or getting the sled repaired. 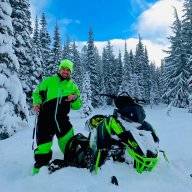 18 mtn cat early build with stock tune! This sled has been flawless from day 1. Zero issues with 1200 miles with stock rails and 400 now with alpha setup!! After riding the mono rail I’m sold, this thing just rips so much fun and the traction is unreal. Yes it’s a little harder to ride in set up snow but to me that’s not even really fun on a standard skid!! Mods are a diamond s ti can which has been on from day 1 and IceAge elevate which i feel is huge over my brothers stock 20 setup, still og belt!