What boots do you wear for sled accesses skiing?

I bought a sled last fall for access to more alpine zones for snowboarding and splitboarding. If I'm snowboarding I'm happy to chew up an older pair of boots riding the sled but when I'm splitboarding I'm in AT boots. For you snowmo skiiers, are you wearing your ski/AT boots on the trail on your way out to the goods or are you riding in soft boots until it's time to ski?
N

Jason4 said:
I bought a sled last fall for access to more alpine zones for snowboarding and splitboarding. If I'm snowboarding I'm happy to chew up an older pair of boots riding the sled but when I'm splitboarding I'm in AT boots. For you snowmo skiiers, are you wearing your ski/AT boots on the trail on your way out to the goods or are you riding in soft boots until it's time to ski?
Click to expand...

this is something we have debated back and forth. I am a snowboarder, so it's not an issue for me. My fiance is a skier. We have tried many options. Alpine boots with added rubber soles, AT boots, and even switching - though the switching between became a no-deal once the temps dropped too much. This year we are trying something different strictly for sled access. Apex Ski boots makes a dual purpose boot. Though the price is somewhat outrageous. We picked up a pair off ebay. If they work it will be a perfect blend for what we do. They are surprisingly supportive, but I have doubts about their performance. I was even considering the ability to use snowmobile boots in the Apex shell but I don't think the snowmobile boots are going to be stiff enough. My snowboard boots don't really fit due to the different footprint. I will note the AT boots worked ok, but weren't great and they get torn up pretty quickly.

Hopefully in the next few weeks I can provide a better update. Current Pros are the ability to sled and ski without taking off the boot (and having good traction and mobility). Down sides are replacing the boot/cost, physical size of the boot (add about 1.5-2inches boot length compare to equivalent alpine size) and stiffness of the boot for skiing. We don't ski real technical terrain most days mainly due to avy concerns, but that doesn't mean you want a sloppy boot.
R

I also tried everything (but Apexes....curious!), and end of story, I just wear my ski boots.

For 3 or 4 seasons, I wore the same pair of boots. I did not (quite) grind through the shell, last two seasons in that boot, I epoxied the "high wear" zones every few days.

Now, I've got a pair of Salomon Quest 130s, which have a rubber bit glued to the instep. It helps, but it is not big enough. I probably have 40ish days on the sled in those boots, they're fine for at least another year.

One good suggestion I saw on TGR was to get a pair of bigger-than-needed snowboard boots, pitch the liners, then swap the (warm) liners between alpine/at shells and snowboard shells. Could be an option!
J

Swapping shells and sticking with warm liners is a pretty good idea! I might have to give that a try this year. I was planning on swapping boots entirely but starting in cold liners doesn't sound very fun. 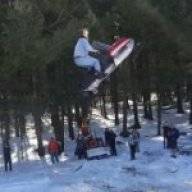 rhalloran said:
One good suggestion I saw on TGR was to get a pair of bigger-than-needed snowboard boots, pitch the liners, then swap the (warm) liners between alpine/at shells and snowboard shells. Could be an option!
Click to expand...

That might have been me.
This is what I do when I ski and have been for the last 3 seasons. I use the liners of whatever boots I'm going to be skiing in, inside some board boots. I mounted two baseplates from snowboard bindings onto my rack to hold whatever shells I'm not using at the time. It's a little bit of a bltch to stuff the liners into cold hard shells but it is SO worth not riding out to zones and setting roads in hardshell boots.

It's pretty cheap and easy to do too.

Here are some overly big pics of my setup.

It s a conundrum! Those apex looks cool on paper but I would be worried to fold them in half skiing...
I have sled in my salomon race boots and it truly sucked. There is no ankle mobility, way too stiff and worst of all the hard plastic soles slide all over the boards. It s a no go.
Most of the time I sled with my AT boots. I have done it with some dynafit TLT 5 and a pair of Scarpa SL Freedom. The dynafit are almost as good as snowboard boots but the sole looks that they were going to fall apart in afew rides. I also broke a buckle jumping side to side. Now I stick to the Scarpa, it s the best compromise. Another plus is that you can replace the soles when they wore off.
If you are in for a lot of hard sledding to access the goods I think wearing snowboards boots and carrying just the shell of your ski boots is the way to go.
All said, I think splitboarding with snowboards boots is the most comfortable/hassle free way to go. 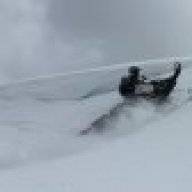 If we are riding off trail technical terrain to get to the goods, we (wife and I) ride in our sled boots and Change into our AT boots when we get to where we are skiing. We both have tunnel bags large enough to carry our ski boots.
So much easier and safer to ride in sport (sled) specific boots if in challenging terrain where a slip/mistake can have big consequences. Been there! One big advantage to snowboarding/split boarding is the boots work well for riding the sled too.
J

I'm probably the only person here who uses a timbersled to access skiing but for me riding the bike in boots wasn't an option unless I modified the shifter so I carry mine on the timbersled tunnel in a dry bag. To combat the cold problem I drop a couple of the instant hand warmer packets in each boot.


But how do you tandem?
N

S.O. put some more time in on the APEX boots this weekend. The boots work as expected, decent for snowboarding and decent for skiing. Putting the hard shell on to ski isn't much easier than putting on a ski boot, but at least your feet stay warm. I need to look at a way to pack the shells better, the straps don't fold away and the shells aren't compact. It's somewhat nitpicking, but it does get tedious. Otherwise, seems to be a good option. Far better than sledding in ski boots from what she tells me.
J

Get a pair of at boots with replaceable sole blocks. I wear black diamond boots and every season I replace the sole blocks. Not bad only about 30$ for the blocks. They are vibram rubber soles so pretty burly for a season

I've chased the lightest and softest boots that I can get to fit my feet since I'm splitting in AT boots. For most of the objectives I'm after I'm not interested in going back to soft boots. If I'm just after pow laps I'll leave the split at home and shuttle on the solid board in soft boots.

Thanks for the good ideas! Hopefully the weather cooperates and I can get out for a few good tours soon.
You must log in or register to reply here.
Premium Features