You are using an out of date browser. It may not display this or other websites correctly.
You should upgrade or use an alternative browser.
T

I have been on the sidelines for the past few years, probably since 2016 watching snowbiking develop. In 2017 I bought 2009 KX450f and a 2moto kit. I liked the bike but never put on the 2moto kit because it looked so behind the timbersled/yeti and thought I would just get stuck if I ever left the trail. Fast forward to February 2021 and I finally pulled the trigger on something to at least get me started into snowbiking. I bought a 2014 KTM 450 SXF that came with a 2016 Timbersled Mountain Horse Long Track already on it. Total for the 2 was 6300 bucks which I felt like gave me a great summer power plant for dirtbike riding, and the kit gave me something to get started snowbiking. I took it on my first ride with a couple of snowmobile buddies and I was hooping and hollering because I was having as much and probably more fun snowbiking than I used to have snowmobiling and it felt so much more effortless to turn and carve and it was near impossible to get stuck even with some finally deep powder here in Utah (bad snow this year) on the right hills. Even with an older/heavier/longer system it was fun on the trail getting to the hills and powder, it felt like it didn't want to turn because of the old style, but I just started leaning more and it felt great. The parking lot was a pain because I don't have a wheel kit yet. I was able to go most everywhere the sleds were going and being my first ride I wasn't jumping a whole lot, but when I did it sure felt plush. My temps were too low for the ride so I will get the blanket/thermobob/radiator covers to fix that up.

So all in all, for an older heavier kit it still felt amazing turning, climbing and just playing in the snow. I know there is more performance to be had, and I want to hear from those that have ridden both Yeti and Timbersleds from model years 2020 and up. I see a lot of posts comparing the two when it was Yeti vs Mountain Horses which yeti seems to take the cake overall for most. I want to see how the ARO 129 2.5 and 3 inch tracks vs the Yeti Freeride or other model 129's are now stacking up. Has Timbersled caught up with their ski/track/overall performance or is Yeti overall still an overall more efficient more nimble ride (it seems they are still about 15 pounds lighter.) Also has maintenance/reliability come up a little bit with Yeti as it seems there were issues with loose/breaking bolts etc(I know TS has it's issues too but overall seems to be less maintenance on average.)

Also I had not heard about CMX much but seems they may be on the same level or better in some ways than (what I have gathered are TS and Yeti) are the two main options in snowbiking. So if someone has much experience with all three that would be awesome.

I plan on riding the Timbersled for the rest of this snow year and maybe next, but then plan on hunting down a good deal on a used TS Aro 129(Maybe a Riot 120?), or a Yeti 129, or CMX. I just like the idea of 129 for a mix of playfulness with deep powder performance and hill, but could be swayed down to a 120.

I don't want this to be a bash session but would love to hear experiences from those who have tried multiple snowbike types from the latest generations. I know Mototrax/Snowtech are out there but they just don't seem to be on par with the Yeti/Timbersled/CMX.

Either way 2 days after riding and I want to get back out so bad!
B

Ride the CMX before you commit to anything else. Lots going for this kit and A++ customer service. 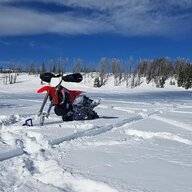 I ride a CMX 120 and have ridden a Camso. Still haven't been on Timbersled/Yeti/SnowtechMX/etc. I can definitely recommend the CMX it has been bombproof and super playful. I've broken a single belt in the three years I've had it (I still have the 21mm old belt), and I haven't had to do any other maintenence on it. Had a single super bad low snow crash that bent the back of the tunnel a bit (no performance impact), but the spindle and my forks were fine. I wish I had a 129 as there have been a few days where I just haven't been able to handle the deep. Eventually I need to get the CMX ski but the Yeti ski has treated me pretty well.

Personally if I were buying right now I'd get either a CMX 129 or a Riot 3S 129. I honestly don't think you can go that wrong though with any of the current Timbersled, Yeti, or CMX kits, so in reality I'd go for whatever I could get the best deal on.