Does anyone know when grooming will start? There's enough low snow to close the gate and plenty up high. We were up there on Wednesday and its rough!
S

You have a better chance of seeing Sasquatch then a groomer up there.

We finally have a decent base.
Now we just need more snow.
Parking lots are ice. Roads are ice for a few miles. Moguls are, well, getting bigger every day. 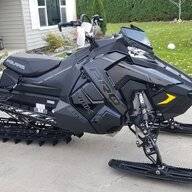 Anyone here when grooming will start? Plenty of snow a week ago and no grooming. Not sure now down low after the heat wave. Sure would be nice he made a valid effort because we all know the groomer will break down the first time out like every year.

Groomer owner is 20ft from me.
I'll find out in a few minutes.

Groomer can't go up the trail on the ice. (I can verify it was bad yesterday)
He tried today. Slid off the road and backwards.
It needs to snow or rain so he can have traction to get up the road.


KrazyKen said:
I heard that the gate at the bottom was going to be locked today regardless of conditions. Anyone know if this has happened? Yesterday's report said little to no snow up to Whites ridge and thin to tree phones.
Click to expand...

As of jan 1 gate was closed in tampico

cascadesnowjunky said:
If no grooming why close the gate? WOW.......
Click to expand...

Roads are solid ice.
I personally wouldn't drive up them without chains.
And if u know anything about me, that is saying a lot about the road. 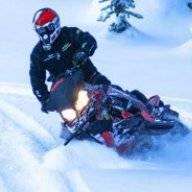 There is enough snow/ice to make it up the trail, just use caution and watch your temps, stop when needed, but carry speed up the hills so you don't spin out.

The Yakima Ski-Benders 2nd annual Scavenger Hunt based in the "old" Red Saddle Parking Lot on Saturday HAS BEEN POSTPONED DUE TO FREEZING RAIN IN THE PARKING LOT AND LOW ELEVATIONS. Top prize is $250 cash for Adults (16+) and $100 cash for kids 15 and under. Come look for the YAKIMA SKI-BENDERS trailer Saturday morning to get signed up and grab a map and find out how it works! We'll have a good selection of prizes including many sled specific prizes to give away, along with lots of food and drinks for sale. 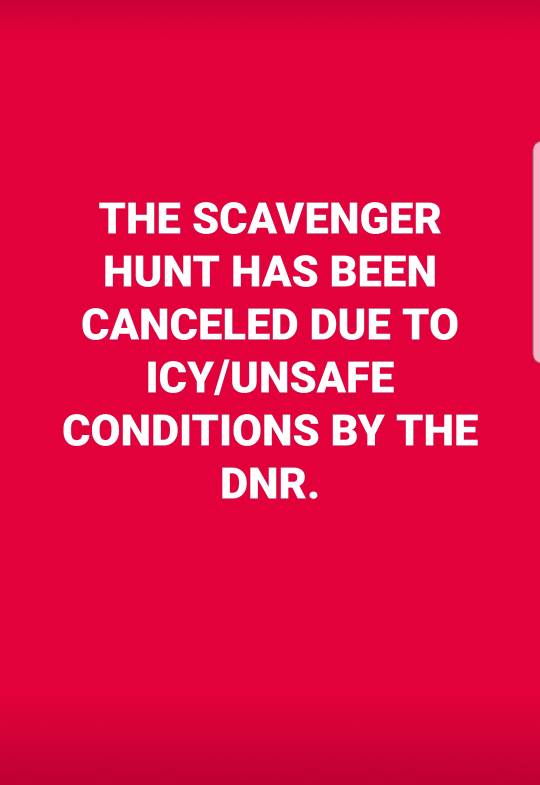 -As you can see, the Ski-Bender Scavenger Hunt has been cancelled - hopefully this is just postponement until we get more snow. DNR personnel were more than willing to work with us to schedule the event at a later date. The reason for the cancellation was unsafe/ice conditions in the parking lots and access to them. The parking lots themselves are not closed as of this time. Today, there have been a couple of instances where 'bilers in there trucks slid off off of the DNR roads just trying to get into the parking areas. It is not a great situation, especially with snow conditions being somewhat decent at this time in the higher elevations.

The MFork/Jackass gates are shut do to safety/ice concerns on the roads. This situation was not helped by last Sunday having a non-snowmobiler in a light blue Ford Expedition go past the "closed to all vehicles except licensed snowmobiles" sign. The individual made it nearly to Whites Ridge...He then spun out.

There has been no snow down low since last weekend and a bit of freezing rain this morning at the parking areas.

The groomer attempted to run today, but was stopped by DNR personnel for safety reasons - He would not have been able to pull any type of grade to even get past the gates...so this wouldn't have happened anyway.

Hopefully, the forecasts for next week are finally accurate - so that we can finally get some snow down low!

Hope u are shoveling snow on Wednesday Morning!

Not sure how much snow fell sunday morning but we should have 3-6" tomorrow. That should be plenty for the scavenger hunt and the groomer to get up the trail if he hasn't already.

Have the conditions improved? Looking to head to Tampico tomorrow morning.
G

Was up Thursday,they groomed the parking lot instead plowing which is great.Had a great day of riding.

The elusive Corduroy has been spotted!!!! The groomer was on the trail and made the loop from middle fork to north fork on Saturday and it was greatly appreciated! Conditions are improving! Parking lot was stuffed full of rigs from what we saw and the tire tracks left behind when we got back.
Last edited: Jan 13, 2019 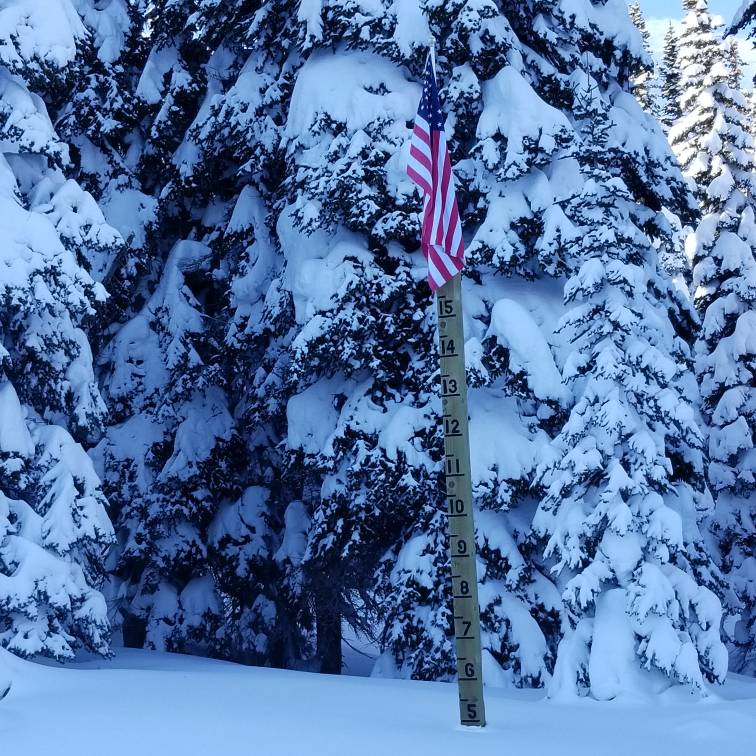 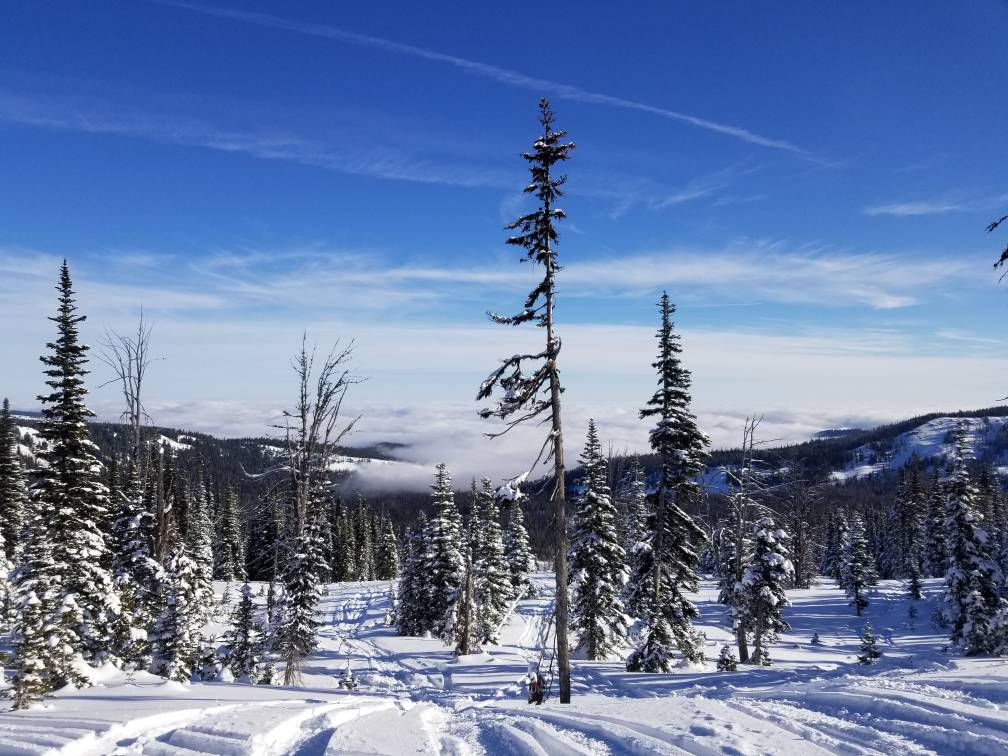 Everyone, we all need to obey the boundary markers in and near the parking areas. Thank you.
. 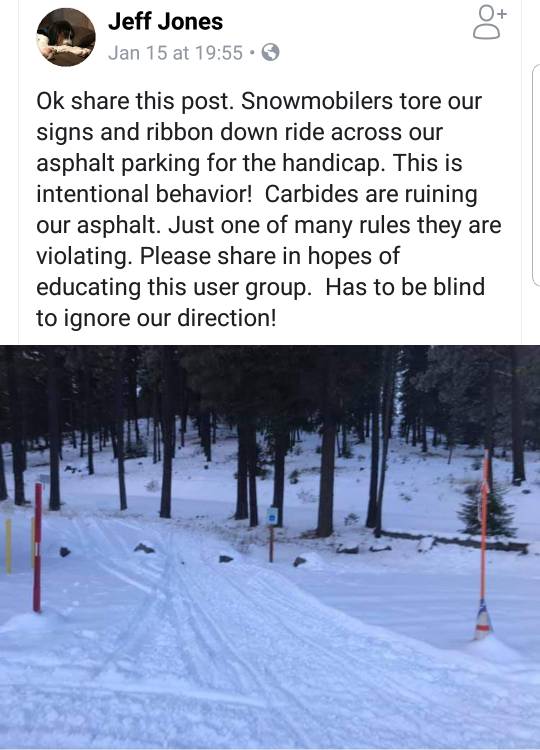 I get the staying out of marked off areas, we all should obey....

But destroying asphalt with carbides ?? it leaves a couple little lines in it.....
You should see my shop if that's the case....LOL!!!!


summ8rmk said:
Everyone, we all need to obey the boundary markers in and near the parking areas. Thank you.
.