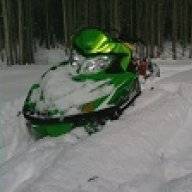 Both of my rails are bent. Is it possible to bend them back? They have about 1/2” bend about in the middle. I have called salvage yards looking for a used set and no luck so far. New rails are $400/set. Ice Age rails appear to be $500/set.

MountainCat1 said:
Not sure about the fitment, but I have a set of take-off rails from a '17 Mountain Cat 153 with ~ 150 miles on them. What are they worth?
Click to expand...

Proclimb rails don't fit M-series sleds. All the mounting points are different. You want to look for a set from 2008-2011. Ice Age should be $400 if you want bare aluminum and the $500 price is for anodized black.

Wow, tore into it today. It took extra patience and thought how to remove many of the bolts which fasten the rails to the suspension because the bolts have never been removed and had lots of loctite from the factory. Also, the bolt which holds the lower shock eye on the front shock was rusted in place pretty good.

Also, to my surprise, it was really difficult to remove both bolts which hold the rear axle. I always knew you had to hold both while loosening or tightening the track but upon full removal I may have had one which wasnt fully tight because it was corroded and blue loctited in place pretty good and wouldnt tighten or loosen, if that makes sense. Luckily I was able to separate the rails even with a few bolts still in place, then grab the shafts with a vice grip to keep it from turning while I used a lot of force to back the bolt out.

I will try to straighten the rails tomorrow but my confidence level I will be successful has dwindled significantly after attempting to straighten one. I will have another go in the cool morning temps because it was 95 and humid today and my patience was running out.
You must log in or register to reply here.
Premium Features