You guys getting carried away with yearly maintenance on these thing or just changing the oil and go? Got a 19 with 1 season on it. Not near the abuse as the alpha.
F

So far I have just blown out the clutches. Changed the oil mid season the first year just to get rid of all the "break in particles" then at the end of the year. Looking at getting a magnetic drain plug for it next year. Lost one screw on the mudflap so check those out, will probably loctite them in when I put it away for the summer. Oddly enough I have had the choke lever attachment break twice at the carburetor (requires a new carb). Would really like to pull the rear skid and grease up the shafts and maybe even add grease zerks but will see if I work up that much ambition. Noticed some cables were rubbing where they go through the hood that I didn't like so I added some extra corrugate to protect them. Probably put a new spark plug in it this summer or just after I pull it out of storage. I live in a pretty dry climate so I usually don't fog the motor but if I do I won't put the new plug in until after I burn the fogging oil out in the fall.
F

Check all the screws they seem to be coming loose on mine and falling out. Just noticed two More are missing from the hood bracket so I will have to get replacements. Pictures below show the holes were the screws are supposed to be. 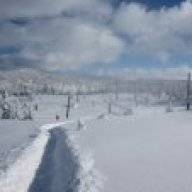 FlynHigh said:
Oddly enough I have had the choke lever attachment break twice at the carburetor (requires a new carb).
Click to expand...

I had the choke cable break near the carb earlier this year on my 2019. Found it when my daughter complained of her thumb hurting about 10 miles into a ride. I felt the throttle and immediately felt a lot of resistance. The broken choke cable was wedging the throttle cable right near the carb. Really lucky it didn't stick wide open on her. Unsure how it could even happen/break on the trail. My dealer fixed it.

For seasonal maintenance, I wash it, change oil, stabilize the fuel and grease/spray oil wear I can.
You must log in or register to reply here.
Premium Features