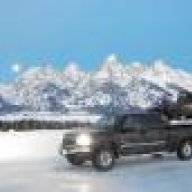 Retiring from the sport after 40+ great years

I have two 156 M8s with electronic reverse.

Turbo M8: OVS style turbo package with some of my own drivability/reliability mods: Tial 2871 - 4" Intake housing w/fresh CHRA Single throttle body system w 4 injectors Intercooler, Fueling programmed for 12-17+ lbs of boost ( running at 13 on av gas when I parked it).
Bottom end of cylinders porting for turbo use, combo of porting, av gas, and single throttle body makes for very responsive bottom end power. Big mag weights set at 88 grams, secondary running 40-46. It has a Diamond S hood, Lightweight Boss seat, M10 air ride suspension with a Timbersled 38" front suspension. It sports a 156 2.5 camo track. There is a spare used Easyride suspension sitting on the shelf for it. It has a bit nicer big bump ride but wheelies much more than the M10. Lots more than I can remember.

M8: The other has a stock 09 motor in it, so that the turbo stuff would all swap over if needed. The chassis has been upgraded to all newer cat float suspension. Nothing fancy about this one, just a clean well setup sled. Both have the back of tunnel modded for deep snow and cross fire coolers to keep em reliable.

Enclosed Trailer: old school Wells Cargo Style enclosed two place drive in drive out trailer. It is 12" long... yeah I know they didn't make such an animal.. long story, but I'll tell it to a serious buyer. The sleds both fit in it, with room to spare. It is a little long in the tooth, but it works just fine, tows great!

Sled Deck: Silver Lake expandable sled deck. It was ordered an extra 3" taller to accommodate tall gas cans and other gear under neath it. It's in great shape and has always been stored on a rack when not on the truck.

Also included are tons of parts such as: Two spare lightweight Boss seats, Extra Diamond drives, Clutches, Springs, Weights, Belts new and used, Cylinders, pistons, spare turbo with bad center section, skis, cable scratchers, specialized tools etc etc etc. We never had much dealer representation here, so I stocked up on parts as I could afford and find them. There are probably a number of parts for previous sleds that I owned. Going off of my experience with all my old mod sleds I was in the habit of picking up spare parts (cylinders, clutches, etc) when I broke down. This little turbo blew my mind. It never broke... just kept on ticking. Don't get me wrong, I broke fasteners, reeds, stuff like that, but never lost a motor or diamond drive.

Also included is snow gear. I have lots of bibs and coats that I would love to see someone use. I know it's a personal thing, but if you want any if it, it will be included. Some Klim, Cat, etc etc etc.

Please, be mindful, this or any turbo is for a savvy, mechanically inclined individual. It also takes a pretty high degree of skill level to ride it to it's potential. That said, it has good manners while it's on the trail and I have allowed many people to take it for a spin... no lack of smiles and big eyes when it was brought back.

You ask why? I injured an eye in 2011 and I don't have the depth perception it takes to play where I used to. Trails are OK, but just not my thing. Now, I'm getting old, fat, and lazy too.

I am going to sell all as a package. I want $9,000 for everything listed above (plus stuff I've forgot about too) I am not willing to separate at this time.

email me at tonysnoo@gmail.com for more info.

Also... have avy gear to go with.... avivests and beacons
You must log in or register to reply here.

Swapping BD Side Kick Turbo kit from one sled to another?