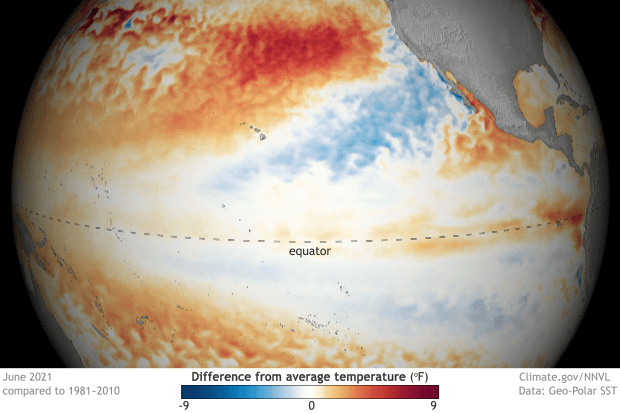 As things stand with the El Niño-Southern Oscillation (ENSO), neutral conditions are currently present in the tropical Pacific and favored to last through the North American summer and into the fall. But forecasters at NOAA’s Climate Prediction Center have issued a La Niña Watch, which means they see La Niña likely emerging (~55%) during the September-November period and lasting through winter.

I know you’re all excited for me to talk about La Niña, but I’m a killjoy, so bear with me for a second while I talk about the current state of the Pacific.
In June, ocean surface temperatures were near the 1991-2020 average across the equatorial Pacific, including the all-important Nino3.4 region (check out this post for more on ENSO indices), which we use to monitor the state of ENSO. Specifically, the June sea surface temperature in the Nino3.4 region was 0.25 degrees Celsius below average, well within the ENSO-neutral range. Ocean temperatures in this region have been quickly returning to near-average conditions over the last several months, increasing by nearly half a degree Celsius since April and over a degree Celsius since last winter’s La Niña peak.

But as we have said, so many, many times: there is more to ENSO than just the surface of the ocean. Putting on our snorkels, let’s dive beneath the surface of the Pacific, where things aren’t as near average but still firmly indicative of an ENSO stuck in neutral. Waters were slightly warmer than average, except for the eastern Pacific where cooler-than-average waters developed near the thermocline—the layer of water that marks the transition between the warmer upper ocean and colder deeper ocean. But overall, nothing to write home about.

To finish off this trilogy of signs about our current ENSO-neutral Pacific, we look to the skies! After all, ENSO is a coupled atmosphere/ocean climate phenomenon. And for the past month, that atmosphere has been pretty darn neutral. Winds at both low and high levels of the atmosphere were pretty normal, and while thunderstorm activity was reduced near the dateline, things were mostly average elsewhere.

There hasn’t been a more boring trilogy since Star Wars episodes 1-3 (yeah…I said it). But then again, that’s expected during neutral ENSO conditions across the Pacific. 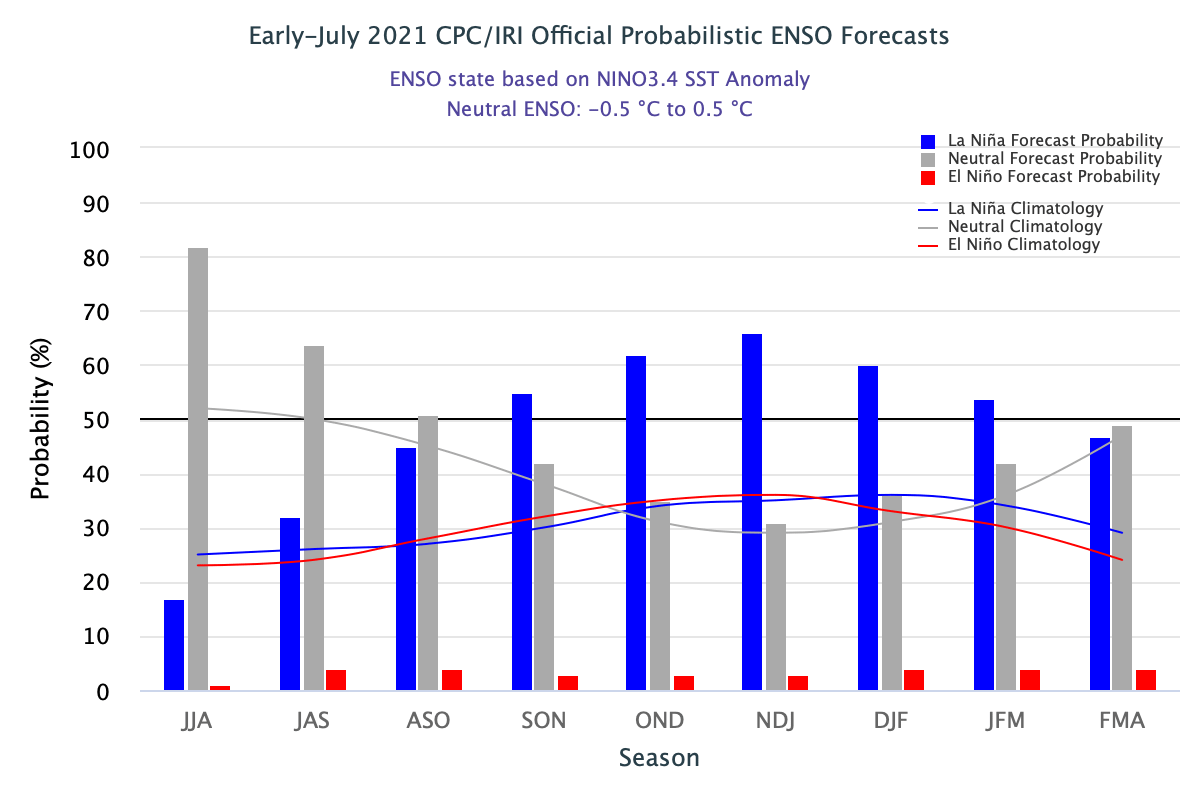 It might seem odd, then, with things seeming so… blah… that a La Niña Watch has been issued. To clarify, a La Niña Watch means conditions are favorable for the development of La Niña within the next six months. So, what’s in the climate model “tea leaves” that has helped scientists feel comfortable enough to start throwing the La Niña label around?

The answer, in part, lies in a strong computer model consensus. While most of the models we look at predict ENSO-neutral to continue to last through fall, many models from the North American Multi-Model Ensemble (NMME) favor a transition to La Niña during the fall and into winter. The NMME is incredibly helpful to forecasters in predicting the future state of ENSO, especially when we are past the notorious spring barrier, a time when model accuracy wanes. 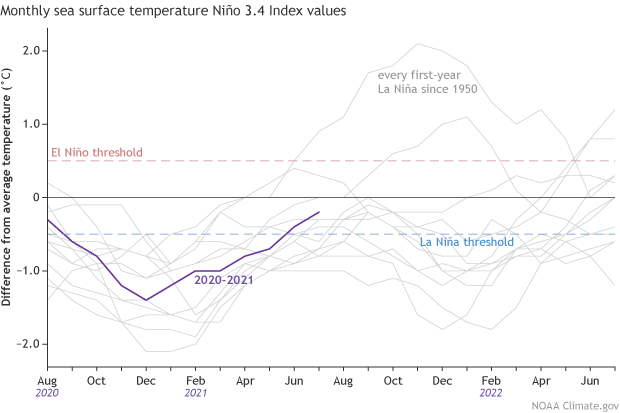 Monthly sea surface temperature anomalies (difference from average) in the Niño 3.4 region of the tropical Pacific for 2020-21 (purple line) and all other years starting from first-year La Niña winters since 1950. Climate.gov graph based on ERSSTv5 temperature data.

Is it all that unusual to have two La Niña winters back-to-back? Nope! In fact, of the twelve first-year La Niña events, eight (!) were followed by La Niña the next winter, two by neutral, and two by El Niño. Honestly, with those numbers, it would have been more surprising if we thought neutral conditions would continue all year.

Putting all of those 12 first-year La Niñas together with 2020-2021, it’s evident how much this last year doesn’t stand out. Though, twelve past cases are not a ton to rely on by itself. This La Niña Watch is buoyed by much more than that.

As things stand with the El Niño-Southern Oscillation (ENSO), neutral conditions are currently present in the tropical Pacific and favored to last through the North American summer and into the fall. But forecasters at NOAA’s Climate Prediction Center have issued a La Niña Watch, which means...

One specific reason why and when any change to ENSO is important is the potential influence on the Atlantic and eastern Pacific hurricane season. As noted on the ENSO Blog in the past, La Niña can help make atmospheric conditions more conducive for tropical cyclones to form the Atlantic, and less conducive in the Eastern Pacific. If 2021 so far is any indicator, it could be an active year: through the beginning of July, five named storms in the Atlantic have already formed, a new record-breaking the previous record set just last year. In August, the Climate Prediction Center will issue an updated hurricane outlook, so stay tuned for more info on that. In the meantime, you can read the outlook from May to see what scientists were thinking two months ago.

This post first appeared on the climate.gov ENSO Blog and was written by Tom Di Liberto.

Another El nino winter??? Time to sell my sled, best sled ever and the worst winter for the west.

caper11 said:
Another El nino winter??? Time to sell my sled, best sled ever and the worst winter for the west.
Click to expand...

Sadly NO.
They are now calling for a La Niña

caper11 said:
Another El nino winter??? Time to sell my sled, best sled ever and the worst winter for the west.
Click to expand...

Snowpack was about normal here in the West (cascade mtn range). Any further west than my area and ur in the Pacific....
Do u mean midwest or, do you consider the Rockies, west? They are a few hundred miles east for me.

We had a pretty good winter in the hills. 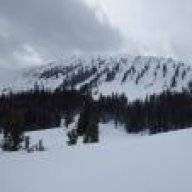 christopher said:
Sadly NO.
They are now calling for a La Niña
Click to expand...

WTH! Not what I typed, my phone must of changed it.
We had a la Nina already, it was very cold and dry, I had not seen -40c in a long time. Our spring and summers the past two years were extremely wet. This summer is very dry and hot.
Summit8rmk im in Canada. So the Valemount, Mcbride, Revy area.
I had enough snow around home in alberta last winter to take the kids out once, and grass was showing. Very disappointing.
The snow in the hills was lackluster, and I definitely didn’t need a turbo. I had two deep trips submarine all winter.
This year I had the Best stock sled ive ever owned, and the snow pack sucked.

To the east in Saskatchewan, my contact there said it was the best winter he had in a long time.

Maybe this La nina will be different this season???

We can only hope their prediction is WRONG

so what are they predicting?? which one is bad? I would say this past season the snow was average here in the SE corner of Washington...

During El Niño, trade winds weaken. Warm water is pushed back east, toward the west coast of the Americas. El Niño can affect our weather significantly. The warmer waters cause the Pacific jet stream to move south of its neutral position. With this shift, areas in the northern U.S. and Canada are dryer and warmer than usual. But in the U.S. Gulf Coast and Southeast, these periods are wetter than usual and have increased flooding.

La Niña These cold waters in the Pacific push the jet stream northward. This tends to lead to drought in the southern U.S. and heavy rains and flooding in the Pacific Northwest and Canada. During a La Niña year, winter temperatures are warmer than normal in the South and cooler than normal in the North. La Niña can also lead to a more severe hurricane season.
You must log in or register to reply here.

NOAA increases chances of La Nina to 75% this winter!!