This year the New Mexico Crew is back in full swing! Except for the first ride of last season, I was on R&R for the entire season due to a shoulder injury. I'm feeling pretty good and will be back in the game this year.

We had some snow on the Sangre de Cristos last week, the weather is turning cooler and the aspens at my house already have a touch of yellow on them. Get those sleds ready because it's coming!

Speaking of sleds, I may jump up to the Axys chassis this year as I sold my Pro last season. Most of the regular crew is running the Axys already so I figure it's time.

New Mexico Crew past and present jump in here and let us know what's up! Until then, here's a few blasts from the past to get you pumped up for this 2016-2017 riding season:

Ya know a turbo would fix this problem!

hey glad to see your back in the game, I remember all them pics
T

The rain cleared up across the valley and here's what it revealed. 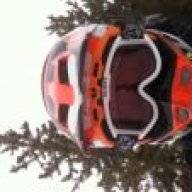 looking for some info on Angel Fire NM

i have buddy who says he bought a cabin in Angel Fire. he says he wants to buy a snowmobile, live in DFW and has never had a sled. what is the riding there? are there groomed trails at all or is it strickly back country? he also has invited me to come and ride. I have a 162 2016 AC M8000. it seems funny and crazy to go south of Iowa and ride in NM. we typically go west to wyoming every year. any info would be helpful. tia!
T

I rode around the backcountry of Angel Fire one time so I am not the most familiar with the area. Here's what I can tell you. I did not see any groomed trails and frankly, would be surprised if there were groomed trails. The Carson National Forest has about 50 or so miles of trails for snowmobiles in the area as I learned this from "angel fire excursions" that runs a snowmobile tour operation there. I unloaded just south of town at a spot recommended by Angel Fire Excursions. There is a road that runs west off of 434 but I don't remember the name. The trail was lightly used and I hopped off and explored the backcountry from there. You may want to call AFE or another tour operator to ask. You can also find Carson use maps online that will indicate wilderness areas to avoid. I know there are a few guys that infrequently come to this forum that have ridden Angel Fire more than I. Hopefully they can help.
You must log in or register to reply here.
Premium Features