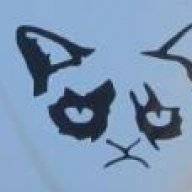 Last Thursday in West Yellowstone, my throttle started sticking part way through the day. It would only do it occasionally, and it would release with a blip or two. Luckily, it was sticking at about 1/4 throttle, not more, so it was easy to deal with, since we were near the end of the day.

When I got back to the cabin, I pulled the top cover and found the oil linkage rod had come off the lower ball. The linkage was occasionally resting on a ledge of the intake, mostly when the sled was pointed uphill. The oil lever spring returns to idle, so it's good that we were riding out gently on singletrack most of the way...

I pulled the belly pan and put it back on, but it won't stay. Even just working the throttle slips i it off in a few squeezes. I flipped the little socket end, but that didn't make any difference. It appears the ball on the oil pump lever has worn flat where the linkage pushed on it.

For now, I have the linkage completely off. I mixed the tank at about 50:1 for the last day's ride and it rode fine. I'd rather not have to mix fuel, so I'm working to replace the ball and socket...

Just wanted to say, if you have an older M-series, or if your throttle is occasionally sticking part way open, this would be a good thing to check. Mine has about 3500 miles on it. Given that oil goes to idle, continuing to ride hard once the linkage is off will likely do some damage eventually.

The rod thread is 10-32, so this should screw right on. I'll drill the ball out of the arm and bolt this one on. Done, oil injection back in service!
M

Thanks for finding and sharing!
You must log in or register to reply here.

F
Trying to get to the bottom of the issues with my sled..