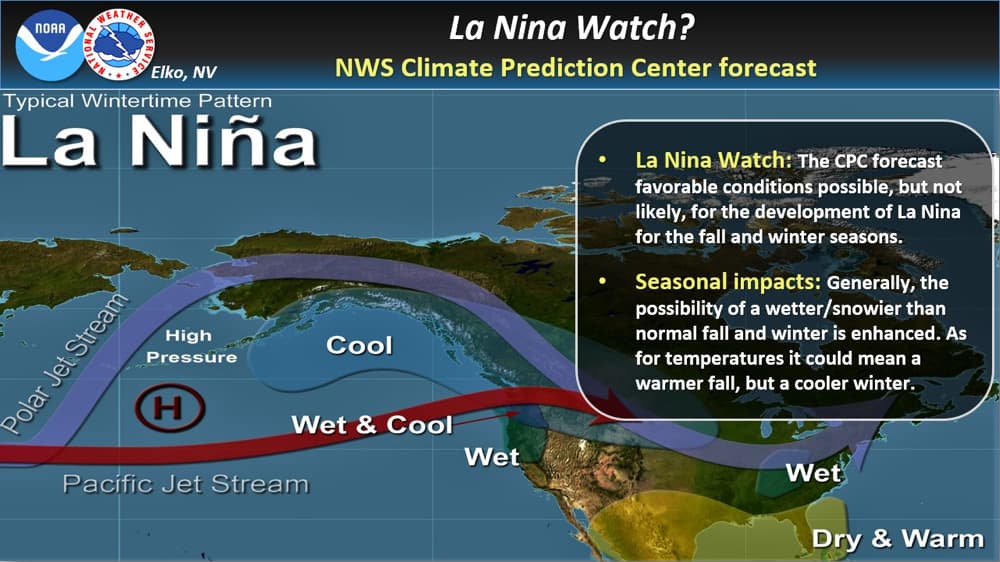 Credit: NOAA
On July 9th the Climate Prediction Center issued a La Niña watch. This means that conditions are favorable for the development of a La Niña or a negative phase of the El Niño Southern Oscillation circulation over the next six months.

The CPC indicates a 55% chance of development over the time period, this product is not a forecast that a La Niña will occur, just that the environment slightly favors that possibility. This product can be canceled like any watch product if conditions change.

A La Niña event happens when the trade winds over the equatorial pacific which are easterlies, are stronger than normal. This results in an area of cooler than normal sea surface temps in the eastern Pacific Ocean. La Niña is not a true opposite of El Niño (positive phase) but is, in fact, the enhancement of the neutral or typical atmospheric flow pattern over the eastern tropical pacific. This phase of ENSO can affect the seasonal weather patterns here in North America like El Niño but in a different way as shown in the graphic above.

Generally, depending on the strength of La Niña, the possibility of above-normal rain and snow for the fall and winter seasons is increased for the west. For temperatures, a typical La Niña tends to be warmer than normal for fall but could be colder than normal for winter.

Remember, it is still way too early to try and determine the impacts of this event, if it develops at all. For more info on La Niña and El Niño check out www.cpc.ncep.noaa.gov and www.climate.gov/enso (warning: Cool Science content.)

On July 9th the Climate Prediction Center issued a La Niña watch. This means that conditions are favorable for the development of a La Niña or a negative phase of the El Niño Southern Oscillation c…

MAMMOTH LAKES WEATHER thinks its gonna be an early winter but hey the entire town is a ski resort !!! Expkains the motivation

Typically starts around new year. I think in the early 90's it started around Halloween. Los Angeles County received over 10 feet at 7000 feet in a few days. The picture on my icon is a cabin in LA county a 7500 feet. The details are not clear but behind the cabin the snow is level with the second floor roof and the back wall was crushed by the weight of the snow. Epic snow !!!
You must log in or register to reply here.
Premium Features