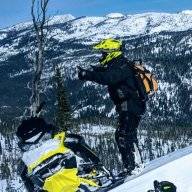 Comments are needed for the Nez Perce Clearwater Forest Travel Plan. The main area of concern is the area of the Great Burn. Please go to the Nez Perce Clearwater National Forest website and make a comment in support of winter motorized recreation. The deadline is April 20, 2020. Yes, 2 days away.
The Nez Perce Clearwater National Forest is just north of the Payette National Forest. The Payette Forest lays south of the Salmon River, east of the Snake River and west of the Salmon Challis Forest.
The Payette Forest has 2 large Recommended Wilderness Areas (RWA) that have some incredible snowmobiling opportunities but snowmobiling has been restricted/eliminated. These 2 areas also had historically been open to snowmobiling but for the last 20 years, or more, it has been restricted or closed. The Payette Forest surrounds the communities of Cascade, McCall, and New Meadows with some of the best snowmobiling in the region, as you folks from Boise, Meridian, Nampa, and Caldwell realize.
If the Great Burn is not opened to snowmobiling only because it is a RWA, then rest assured, when the Payette Forest does it's "Travel Plan" renewal in a couple of years we will see the same result.
The science that they claim for the closure in regards to wildlife is not adequate and mostly incorrect, due to over zealous biologists and activists doing the studies.
Now is the time to make a comment on this issue. Even if you don't recreate in the Nez Perce Clearwater Forest, you need to make a comment.
And, I mean "NOW". Comments close on April 20th.
Last edited: Apr 20, 2020
K

US Forest Service NEPA Projects Home
You must log in or register to reply here.
Premium Features