You are using an out of date browser. It may not display this or other websites correctly.
You should upgrade or use an alternative browser.
W

Thought I'd start a thread for the maintenance issues that people are finding on higher milage G4s, that may be unique to G4s (i.e., not typical to all Ski Doos). Post your experiences here for posterity.

Mine has 4000+ miles and I've had a few issues that are new to me on the G4 (I've owned several Doos since '07). First up are the clutch rollers. The P-Drive was touted as being maintenance free, and compared to the previous generation TRA it is very low maintenance. I was recently talking with my dealer about what I should be doing maintenance wise at 4k miles, and the only thing he mentioned was secondary rollers, said they are failing a lot on G4s (foreshadowing!). I asked about P-drive rollers as well, but he said I didn't need to worry about them, because they have needle bearing rollers and should last the life of the sled. I ignored that advice, because while mine looked fine, the rolling resistance was pretty bad. I recently spun the rollers on a brand new P-drive and found they moved quite freely, so I thought it would be worth replacing mine, because I figured it would improve performance and WOW did it ever! Almost feels like a totally new sled in comparison. So, if your rollers are sticky, at least pull them, clean them and regrease them. C&T Powersports is selling this nifty setup for greasing P-drive rollers: http://c-tpowersports.com/2013website/Product/P_Drive Clutch Roller Lube Kit.html. Works great. Wish I had known about it sooner (absent this tool, you'd have to buy a tube of Isoflex grease for around $50, as well as the adapter and find or fabricate a grease gun with a threaded tip). Now for the secondary rollers. Mine lasted 4,000 miles, so not a premature failure, but not two weeks after getting the dealer's warning, both of mine failed, but I got super lucky. When the rollers fail the pieces often fall into the clutch workings and cause it to "get stuck". Can easily be a stranding issue. With that in mind, I bought the parts to replace the secondary rollers (I went with the High Torque version) and pulled my sled into the shop with the intention of performing this "preventative maintenance". When I pulled the clutch cover something fell into the bottom pan below the primary. Lo and behold, it was half of a secondary roller. I dodged a bullet on that one. Unfortunately, I was not able to repair it then, because Doo decided to use some spring pins to secure the roller bolts, to prevent them from coming loose. And removal of that pin requires some kind of black magic on my model year. Post '17, I believe, the spring pins can simply be pounded out with a punch, but on mine they have to be pulled with a mystery tool not specified in the manual. One other issue I've had on the G4 that I didn't on prior Doos was the bushings on the rear suspension arms wore out. They went with aluminum bushings on the '17s which are garbage. Not sure about later models. Other than that, my sled has been pretty standard maintenance-wise (had to replace ski leg bushings a couple times, rear tunnel cap failed from running over the flap unloading, etc.), so far.
W

Forgot one: The plastic thing-ies that the torsion springs run through on the bottom were totally worn through. Never saw that happen on any past Doos either.

great post. i have a question about the isoflex grease attachment for the roller bearing. what does it do that you couldn't do by placing the grease on a dowel or some other implement to get inside the bore of the bearing? the needle bearings are readily visible and accessible so it would seem that you could just put grease directly on the needle bearings using anything as long as it fits inside the roller bearing.

The applicator tip is plugged on the end and has holes throughout the shaft, so it pushes the grease into the bearings. Not sure how much of a difference it makes, but it's pretty cheap and I'm now going to lube them at least every season, so worth buying IMO. 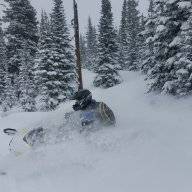 That is how I greased mine and it seemed to work fine. I smeared grease on the needle bearings and then used the pin the roller rides on to spin it and work the grease in. I believe the rollers should be greased every 1000 miles or so personally. I had mine apart at 1500 miles and they were pretty sticky.

Also keep an eye on the black torque rollers in the primary too. I've had a set wear a flat spot. That definitely robs RPM!

Plugs and a fuel filter every year for me too.
You must log in or register to reply here.