Smaller, lighter, mightier still.
Capture and share your life’s most meaningful experiences with the HERO3+ Black Edition. 20% smaller and lighter than its best-selling predecessor, it delivers improved image quality and powerful new features geared for versatility and convenience. SuperView™ is a new video mode that captures the world’s most immersive wide angle perspective, while Auto Low Light mode intelligently adjusts frame rate for stunning low-light performance. Combined with 30% longer battery life, 4x faster built-in Wi-Fi and a sharper lens, the HERO3+ Black Edition is the most advanced GoPro yet.

Smallest, lightest GoPro yet.
The HERO3+ Black Edition is 20% smaller and lighter than previous models—making it the most mountable, wearable and versatile GoPro ever.
Professional video quality.


Powerful photo capture.
The HERO3+ Black Edition captures gorgeous 12MP stills at up to 30 frames per second—perfect for fast-action sequences. Time Lapse mode enables automatic photo capture at 0.5, 1, 2, 5, 10, 30 or 60 second intervals. Continuous Photo shoots full-resolution stills at a steady 3, 5 or 10 frames per second when holding down the shutter button.

Introducing SuperView.
GoPro is proud to introduce SuperView, a video mode that captures the world’s most immersive wide angle perspective. It allows you to capture more of yourself and your surroundings in the shot—resulting in captivating, ultra engaging footage.

Improved audio.
Sound quality is as important as image quality. The HERO3+ Black Edition features upgraded audio performance, capturing even the most subtle of sounds—whether you’re recording voices, music or the roar of your engine on a spirited drive. Advanced wind-noise reduction technology keeps the audio clearer during high-speed activities.

30% longer battery life.
Featuring a 30% increase in battery life, you can go longer and capture more with the HERO3+ Black Edition.

Control, view, share—4x faster.
With 4x faster1 connectivity to the GoPro App, you can preview content in near real-time2, and share your photos and videos quicker than ever. The GoPro App makes it easy to control your camera remotely with a smartphone or tablet—plus preview, play back and share your favorite shots via email, text, Facebook®, Instagram™ and more.3 Also enjoy enhanced connectivity to the included Wi-Fi Remote, which enables control of up to 50 cameras from distances of up to 600’/180m.

Check out the GoPro App >

The GoPro App makes it easy to control your camera, and lets you do more with your GoPro content than ever before. Get full remote control of all camera functions. See what your camera sees with live preview for easy shot-framing. View photos and play back videos, then share your favorites via email, text, Instagram<sup>™</sup>, Facebook<sup>®</sup> and more.<sup>1</sup>


Use your smartphone or tablet as an ultra-convenient remote control for your GoPro. Quickly adjust camera settings, start/stop recording, switch modes, check your battery level and more. It's great for gear-mounted shooting where the camera is out of reach. Plus, live preview lets you see what your GoPro sees so you can frame your shots with confidence.

Don't wait until you're back home to see your content. Use the GoPro App to view photos and play back select videos captured with your camera. Check out your last run—on the chairlift. See your best wave once you're back on the beach. Plus, you can browse and delete content on your camera's memory card, freeing up space for more great footage.

Want to send that awesome shot you just captured to your buddies back home? Now you can copy photos and select videos from your GoPro to your smartphone or tablet, then share them via email, text, Instagram, Facebook and more. It's a great way to share the moment with friends near and far.

This should certainly SOLVE any lingering BATTERY issues. 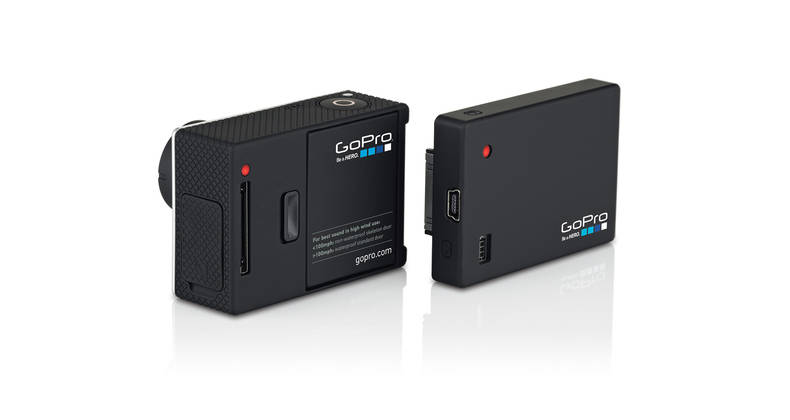 There has been murmurings on the internet of a new Gopro model coming out since all the way back in January when Ambarella released the specs on their newest arm based camera system-on-chip, the A9. The current top of the range Gopro, the black edition, uses an Ambarella A7 chip, so it's a safe assumption that the next generation of Gopros would make use of the newer, more powerful A9. And just how powerful may that be? The A7, for comparison, contains a single core 528 Mhz ARM 11 CPU, while the A9 contains two 1Ghz ARM Cortex A9 CPUs. Meanwhile, power consumption has been kept to a minimum with a switch from 45nm to 32nm fabrication.

Despite many well respected websites (GSM Arena, etc) only recently covering the A9 and associated Hero 4 speculation as though it were breaking news, many people reading this will have already been well aware of the features that A9 allows for. Namely 4k video at 30fps, 1080p @ 120fps, 720p @ 240fps, essentially double that of the predecessor, and also a host of image processing functions such as electronic image stabilization and 3D motion compensated noise reduction. What's unclear is whether it will be able to record 480p @ 480fps, which is certainly something I would like to see.

All this aside, the real question is "When will it actually be in stores?". Given what we know from the last two Gopro product releases, many have assumed that it would be out towards the end of 2013, since it has been a year since the release of Hero 3, and Hero 2 was released a year before that. It definitely makes economical sense for Gopro to get a new product out in time for the lucrative holiday shopping period. But let's examine the dates a bit closer, because cameras don't just get designed over night, they are dependent on the hardware they are built around. Has the A9 even been available long enough for GoPro to design and fabricate a new model? The following is a time-line of the last three generations...

Going from these figures, it would suggest that in reality it takes approximately 2 years from the chip being released to it being available to buy over the counter. However, when you also consider that going from the Hero 2 to the Hero 3 was not only a big leap in terms of processing power, but a big step up in terms of form factor. Smaller, lighter, a flat lens instead of the easily scratched spherical one. Could it be possible for Gopro to just take the fruits of their Hero 3 R&D labor, and simply retrofit it with updated electronics, in order to meet a 1 year product cycle?

When asked recently at the Eurobike 2013 expo by a bikeradar.com reporter, Isabel Pakowski, GoPro's European <acronym title="Google Page Ranking">PR</acronym> essentially said "Gopro 4? What Gopro 4?". But of course if they did have a new product in the pipes they would be trying as hard as possible to keep it under wraps until it's ready to hit shelves, in order to keep sales strong on the Hero 3. Everyone working at or with Gopro (the people in the best position to say for certain) is under a tight non-disclosure agreement. Even if they did come out and leak details, it would have to be done in a way that protected their anonymity, and hence would make it very hard to verify their claims.

So what other evidence can we draw upon? Well, a few weeks ago Gopro reduced their website direct prices on the Hero 3 Black and Silver by $70 and $50 respectively, while the White edition remains the same. Immediately many people drew the conclusion that it was a sign Gopro is trying to clear out residual stock in preparation for the release of a new model. They just might be right. Conversely, it could be that Gopro was simply reacting to competitive pressure from rival brands such as Sony's Action Cam. However, based on the overwhelming wealth of direct comparisons between various action cams that can be found on the net, it becomes clear that even a year down the track, nothing has been able to surpass Hero 3 in terms of performance and quality. Not even Sony's brand new HDR-AS30V.

Which brings me to one last piece of the puzzle, and this is something that I believe has not as of yet been reported anywhere else. Very shortly, Gopro will be offering a further 25% off their already discounted prices. If you are on their mailing list from visiting the Gopro booth at a trade show or event (and possibly from entering the once a day giveaway on their website), you should soon be receiving on October 1st a coupon code good for an extra 25% off the Black or Silver, bringing the price down to a bargain $247 on the Black and $187 for the Silver. With discounts that deep it's hard to believe that something is not afoot at Gopro HQ.

Check out this image from one of Gopro's recent promotional emails.

So what can we expect? I think it is reasonable to believe that Gopro will indeed have a Hero 4 out by the end of the year, that it will be in a form factor very similar to that of the Hero 3, with the only conceivable change being a slightly higher capacity battery (if Gopro are at all listening to the demands of their current user base). Something in the range of 1500 maH. There will of course be a top end model that makes full use of the A9's specs, allowing smooth 30fps 4k video, and slowmo capable 120fps 1080p. However it's likely that instead of having 3 levels to chose from (White/Silver/Black), this time around we will only see two. A Hero 4, and Hero 4 Pro if you will. The White and Silver were simply too closely spec'd to find their own market segments. So if the top model utilizes an A9, the entry level one will likely have an A7, offering similar performance to that of the Hero 3 Black, but without pro features such as shooting in raw. The image sensors are still a matter of conjecture, but you can probable expect to see 11MP on the low end, and a step up on the pro model to something around 16MP for still photos.
Last edited: Oct 2, 2013