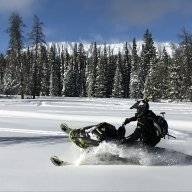 Does anyone have any reports on Cooke? I see the streets are pretty bare but wondered how the snow was up high and if there are any storms in the next week that any one has heard of coming? There are a few of us thinking about coming out to Cooke or the Snowy's the middle of next week and just looking for some fresh snow and not concrete. Thanks for any information.

I'm heading up to Top of the World on Wednesday, should be similar to Cooke. I'll let you know what it's like up there; it was good through March last year, but we've had pretty warm weather this week, so the good stuff may be gone.

Ok, thanks. That would be great.

I was there over the weekend. Town was kinda a mess. Snow was setup like a rock in the morning, afternoons were ok. I see they have a good chance of snow for this week, if that plays out riding will be good. A little video from last week Friday.

Got in some riding at Top of the World, and I can pretty much echo what Backcountrypro said. Even at 10,000', it's mostly wet concrete. Plenty of base once you get high enough. Really crusty in some areas though; you were up to your waist if you broke through that. You might get lucky with this stuff that's coming in though, and even if that's not much, what's up there isn't bad unless you're expecting greatness.

Snow's falling! Who's up to ride next week? I'm available any day but Wednesday...