You are using an out of date browser. It may not display this or other websites correctly.
You should upgrade or use an alternative browser.
N

Just fyi, not much of a forum or social media regular, but to give credit where credit is due, I built and ran a 2016 300XC converted with the BRC 500 conversion and a 2020 Yeti this year. Added a Hygge custom pipe and It's a paradigm shift. It makes 80HP, and is reliable tried and true. There were a few problems/adjustments to make it run right, but Riley and BRC Racing was responsive (shout out to Kelley) gave me amazing customer support and this thing pulls like a freight train. It gathers speed through the deep like no other bike I've ridden. They've been building these for the dirt for years, omg, but it really shines on a snowbike when you're WOT all day.. The best feature is that BRC runs these engines in their Carts at 120HP. There's still room to grow, even more potential.

Awesome engine, great company, they have the passion to build the best product, not just meet a pricepoint or market.. They're working on EFI and a CVT also... ! 2 strokes forever! Glad they didn't sell out to Timbersled. God bless Canada. 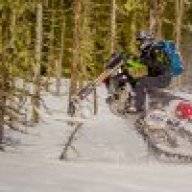 It's cool to hear a first hand report. Thanks. Now that you have it dialed does it feel like a mod bike or more like a factory power curve? easy starting? Pros and pros?
S

Cool to hear. As a friend of BRC, I have been hearing some amazing reviews from other riders in the last few weeks. It's nice to finally see something show up online.
C

What carb are you running on yourBRC ?
M

I do miss my CR500 for its power, it kicked the $hit out of any 4 stroke I've ever owned or ridden but I don't miss all the drama associated with owning and running it. Replacing bolts, keeping extra pipes around and welded up for quick changes, numb hands, crappy handling etc etc. I couldn't keep lights on it or a reg/rectifier for that matter, it ate anything electronic, but man did it pull. This BRC might just be the ticket for getting back into a 2 stroke.
P

Once you can put em in the new chassis...

I want the bottom end and a blank cylinder. Would do the rest myself.

$7500 is still a lot of cake, although I totally appreciate the cost in developing these things.

portgrinder said:
Once you can put em in the new chassis...

I want the bottom end and a blank cylinder. Would do the rest myself.

$7500 is still a lot of cake, although I totally appreciate the cost in developing these things.

PG Do you really think the new gen chassis is that much of a step forward for snowbike application? I feel that the 12-16 250sx is as good and offsets the price of the BRC.5L. If a guy sells the wheels, shock, brakes etc. and buys the donor bike for a good price, it really makes it an affordable build compared to a new 450 build. I do like the 17+ bikes in the dirt, but I also don,t need anymore engine than the 250/300 that ktm offers.
P

If you can make 300 do that well just imagine what you could do with 200cc more.

Even if the top end would not be much more the extra torque of the 500 is nice in the snowbike.

That torque is what brings most guys back to the 450s

Now a well tuned 500 with e start on the other hand may just do it.
C

powdermuncher said:
If you can make 300 do that well just imagine what you could do with 200cc more.

Even if the top end would not be much more the extra torque of the 500 is nice in the snowbike.

That torque is what brings most guys back to the 450s

Now a well tuned 500 with e start on the other hand may just do it.
Click to expand...

I was referring to dirt use when I said I didn't need more power. I already drank the koolaid and bought a BRC for Snowbike.
E

I love the 17+ ktm geometry in the dirt but on a snow bike it truly makes no difference. You can change head angle to whatever you want with strut length and fork height. my mtx spindle can adjust trail to whatever I want. The back county ski and quiver ski has adjustable trail. Some triple clamps have adjustable or multiple offset. Pegs and bars can be moved. If you can't get an old frame to work it probably has more to do with ego of wanting to own a new bike than bad geometry.

The 450 power is hard to beat for sure because its so broad even a big 2 stroke isn't nearly as wide of power. It makes riding 4s easier but there is still a fun factor missing i think because of the slower revving nature of 4s power.
P

like you guys say. I don't think the geometry of the new bikes are any better. it just doesnt make good sense to me to find a 5yr old bike, rebuild it, and then put another $7500 on top of that when i'm into the 17+ versions

the 200cc isn't as good as a guy thinks. not all cc's are created equal. as bore increases, the cylinder wall area doesn't increase as fast as cylinder volume...meaning you can't cut big enough holes in the cylinder to move air in and out. this gets worse at altitude. so ya it says 500 on the side, but you cant fill the cylinder as well. you can help by adding stroke and keeping the bore small, but then then you cant rev it. or you rely on the pipe too much and it will move air (make power) over a narrow band but isn't wide. that's what we found over quite alot of testing. could make about 85-90hp with no over rev, or 75 with a much broader curve. its almost always never about peak power with snowbikes. also things with the head start getting funny. ie squish velocity.

its quite reasonable to make 300 competitive with a 450. compression + pipe.
P

Yes you are making some very good points here, that is where the next Cylinder would be the way to go.

There is a reason why the 600 cc snowmobile engines are so Good. Or the old Yamaha 700 three cylinder mine used to give the 800 cc 2 cylinder guys something to scratch there head over.
If someone would only give us 600 cc Rotax with a six speed gearbox that would be the sweet spot for a snowbike.
A

I haven’t rode one, but have ridden with a BRC for a day trip. Had a yeti ss. Sounded cool, worked really (Really) well, absolutely horrible mileage. 3 bikes all packing fuel for that thirsty pig.
E

Yeh the big bores are thirsty you'll just have to get used to it. I'm the yoda jetting master and can make them run crisp and clean but if you do the math on fuel being burned I should be making over 100hp! I think the power valve blast combined with my instinctive 150 clutch finger expunge unnecessary hp even when I'm just cruising around... But Ive built 300s to run really close to my 380 in peak power and used way less fuel. 100% cylinder filling on the big bores is pretty tricky so efficiency must suffer.
C

Seems like all the two strokes that get improved fuel mileage happens in the low to upper mid range. With Keihin and Mikuni carbs there is no way to make them fuel as they should/designed from 0-60 percent throttle openings. Above that with other variables in place two strokes on the nut are not far off the 4 strokes for overall fuel mileage. I never spent the time to really get my YZ 250 snobike jetting to the nut, but when I first ran it I planned on hauling lots of gas, turned out not to be a big issue. Wasn't far off of the 450 4 strokes I rode with. In all fairness the 4 strokes were making more low to mid torque with the gas they were using.

I have helped a number of KX and Cr 500 cart owners improve their jetting. They tended to kinda hit the correct main jet and just stand on it. Doing that, lean or rich down low, slobbery bad fuel consumption. When ever possible I like to use Lectron carbs because you have infinitely incremental adjustment possibilities, which most guys don't use or take the time to explore. Many new Lectron and Smart carb owners have an idea that they come out of the box near perfect. First ride they are often better than stock and thats good enough. You leave so much on the table..........wow!

So BRC,................. one of our long time FORUM members here and I discussed his new BRC setup and why it didn't feel like 80hp. From his discription of how it ran, we both decided it was likely not his Lectron/ jetting issue. Either a powervalve or timing issue. Later, I believe he tried an already BRC bike tuned smart carb with no improvement or for sure not the 80 hp feel he was hoping for. After dinking with Lectrons on two strokes for 35 years, my experience is that a well tuned BRC 500 sno bike won't be the gas hog that many worry about.........IF you take the time to make necessary adjustments. 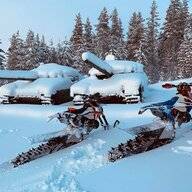 Biggest problem with the BRC 500 is still that no one outside BRC has a dyno showing more than 69,5 hp including Hyggie pipe and LOTS of tuning. If someone sits on a dyno showing more please post. The guys I have been in contact with who work with tuning 2-strokes all day, cannot find any more hp than the 69,5 and they have not heard of anyone doing it either. Would be great to see though if it happens.
B

I'd be stoked with a 65hp snowmoto! Needs to be fuel injected for me though.

Do you have to utilize a tunnel cooler to deal with the heat?
E

Tunnel coolers aren't mandatory but really nice to have if you don't mind some custom hack work.2 strokes actually make less heat into the cooling system than a 4 but they like to run cooler if possible.

the panthera engine has crazy high hp claims but still no one can verify....
R

I run a cr500 powered snowbike and it doesn't use a lot more fuel than my buddies KTM450, maybe a little, but not a lot. I weigh 270 so I think I would eat up more regardless but it pulls well down low and opens up killer at the top. I am on A PWK carb, but I am a jetting nut and have been riding 500's since 1985 so you get pretty good at dealing with them. On my PWK it was pretty easy to get the pilot nd main right but took a couple needles to get the middle correct. I think this BRC thing sounds like it would be pretty cool. I need a 2 stroke 500 just to keep up with my light weight friends on 450's. If you ride a well tuned 500 2 stroke it just pulls harder and I don't care what the dyno says. It took me a few years to get it all sorted out and I am drama free now.

It's like molasses in January but here's a 400 with 65 ponies , this sport is really like watching grass grow . https://arcticcat.txtsv.com/snow/mid-sized/blast-m
You must log in or register to reply here.