Just wondering if any of the 2moto types are on here. Looked at the hawk thread but that isn't really it. Got mine near the end of the year but had a great time.

Just got 2 kits in my shop and can,t wait to try them out. Maybe this week.
R

you guys live anywhere close to SE idaho??? also wondering what is the key to finding a single ski... want to switch to the gen II ski this year. any ideas?
R

REV, did you do a demo ride with these guys yet? you should. tons of fun and you will go places your sled won't fit... like tight trees and insane side hills. and yes, we need snow!

btw, love the coined word ! gonna use this year but plan to give you credit.

sledhauler07 said:
REV, did you do a demo ride with these guys yet? you should. tons of fun and you will go places your sled won't fit... like tight trees and insane side hills. and yes, we need snow!

btw, love the coined word ! gonna use this year but plan to give you credit.

They're gonna call me, thanks and here's my rev.

nice sled man. do you love the rear susp or what? who's rear axle is that or did you chop you stock one? any motor work? ... or other stuff?
D

Hey Hauler, where are you from. I snow checked a 2Moto. Sold my old bike and haven't decided which one to get. Looks like it's going to be the rmz. Cheap right now. Annel was trying to talk me into another KTM. The new Honda efi's are here. Looked at one today. Nice but another 2k more than the 08 rmz with the 09 efi motor. Another friend of mine has one here and said he's getting the kit. He, and another friend of his that has one along with Aaron at 2Moto I think have talked me into the rmz along with the price. As you probably know, Rocky at Boondocker's has one he is turboing. If it works out good and isn't too pricy, I'll probably do one too.
Last edited: Dec 1, 2008
R

sledhauler07 said:
nice sled man. do you love the rear susp or what? who's rear axle is that or did you chop you stock one? any motor work? ... or other stuff?
Click to expand...

Yes i do! Got the axle and rails from mike at ice age mfg. So I could run 8 in. wheels Yeah full slp performance pkg., pipe/can,head,v force reeds, intake,wiseco pistons plus a full porting!
R

ya the injected bike option is looking good. I talked to Brett today and he is on his way to I.F. and then canada. That guy is working a ton! Guess things for them are REALLY busy. One of the things he talked about was the turbo set up he was on his way to I.F. with. Talked to me about the RMZ for a sec. I've been a blue rider so long I don't know if I could do suzuki...

To hear him talk though, the turbo is the key to deep snow riding. Food for thought. For now, I'm getting the GEN II they have and see if that get me enough flotation. 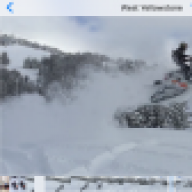 any chance you guys would come to LOLo Mt. for hawk fest presidents day weekend. I would like to compare the bike kits side by side in all types of snow and let you guys try out the purpose bilt one ski machines. It seems the more people that try one ski with open mind end up loving the style of ride available. Hope to see alot of people there. Later Les
S

Just a quick note to tell Brett thanks for the extra effort in hand delivering my ski on his way thru. He has a LONG trip and took the time to sell me the ski and let me take a peek the RMZ... looked sweet even if it is a suzuki. haha j/k yellow riders.

thanks Brett!! now if he could deliver a little snow....
D

Most of my friends are Yamahanian blue riders. I would be too now I am ready for a new one if they had efi. They were a leader in 4 stoke tech. I guess I should go check and see where they are at with it. Still undecided. If your going to go with a winter kit, the more power the better right. 525 KTM with a big bore kit would be good all around. I was thinking 450 RMZ efi since it's lightweight and nimble for summer; turbo it for the winter. Just is dang expensive and time consuming putting it all on and taking it all back off. We do winter rides in Mesquite too. Still thinking. Have you seen that cool 3.5 gal fuel tank for the KTM
S

Ya you make some good points and pose the same questions i'm working on. So after only a day or so of research, I'm leaning toward the KX because it has the power and FI for turbo option and is good in the 2 wheel version for summer fun. I don't think you could be too unhappy with the RMZ either tho. The one thing that stops me on the honda (and i used to ride red) is the same comment many have made the past few years... it wears you out! Tons of power but brutal in its application. Even my brother said this of his and he's a good rider in great shape.

Not sure what the blue boys are doing with the whole FI thing but they took a hit on the reviews for MX due to less than stellar throttle response when compared to the FI rides. This is likely to make them move on it quickly... maybe next year?

Since you live close we should get a little ride together. Do you have a 2moto now? You a sledder still? I haven't soldout completely yet. Been thinking that it's probably time to put the track and ski on cause the weather feels like snow...

Bottom line, I'm gonna want to ride a turbo bike before I spend that kind of money on it.
D

I've had a turbo sled and can't go back now. So they don't worry me other than if they will spend the time to get them right when they have so many sled turbos to get out. Boondockers has already sold well over 400 pump gas turbos alone this year. Let alone the race gas turbos. They will probably sell under 10 2moto turbos if even close to that. I've already tried to buy one last week and they don't have them ready for sale yet or even have a price.

I've sold all my sleds and am trying to get things put together to build some new cat turbo's for my friend and I. Waiting on him to get the cat dealership buyout finalized if ever.

For now it's my chance to do the 2moto I've been really wanting to do for a few years. They say that rmz is very easy on you to ride in contrast to the Honda you described. I heard the rmz was the bike of the year in the magazines. Iv'e also heard the same thing about the honda wearing you out. I've seen the kx. It's definitely a good option. They have an all black monster energy version for like 200 more that I looked at. Very Cool. Same dilemma. 2000 dollars more. That's half way to a turbo with way less power. Either way we end up, looking forward to someone to ride with.

Brad Story tells me the 2moto's are more fun if everyone in the group on the ride has one. So thanks for the interest in riding together. I'm in. I still think it would be fun to take with the sleds when your on the slower rides too to have something to keep your fun factor up high and to practice on.
S

take pictures as you go. I shot a couple overall shots and then kept taking them as I progressed thru the swap to snowbike. This serves remind when you put it back together for the dirt and back to snow the next winter.

The book they have is pretty good. take your time and start on it early so you aren't in a hurry. if you're in Poky, pm me and maybe we can team up on it. i'm no expert but having gone thru it once and getting ready to do it again this weekend so...

good luck and lets ride.
You must log in or register to reply here.