I am really feeling like a greenie, but I cannot figger out how to git the air box out of my '18!

I have searched anything on Youtube that I thought might be of use, and there just aint anything for the G4.

Does the secondary need to come off?

I have the hose cramps loose...
I have the connector alum bar loose on both ends.
I have popped the tabbie near the gas tank out (but it just wants to pop back in)

I see that the sleds just a bit older than the G4 - where the box just simply slides out, but I'm not seeing that here?
And I know that I heard ref somewhere that it does no just slide out. (somewhere)

Doo I have to take the whole gas tank and the frame brackets loose just to git the air box off?

I found info on Doo Talk.
Forgot to look there before posting.
My bad.

But apparently not as bad as removing the air box!

But hey, once you (I) get it out - it's still down hill from there!

I had a mouse nest in here, but further up.
I thought that all was fine - other than a mess.

I started and let this thing run every month - all summer long!
I was amazed to find a nest in there after that!

This thing will likely be 10' in the air next summer!
Or at least be loaded down with moth balls!


Those are some short warrs to be replacing!
And just git'n that loom out of there is going to be the next thing!

It runs fine, but I'm guessing that had we gone riding, that those warrs would likely have gotten to know each other and shorted out.
One warr is completely gone, and I am guessing that must go to the sending unit?
IDK - as the tank is on fumes anyhow....


My reason for pulling the box was to install a LH throttle.
We'll see if I git there.... 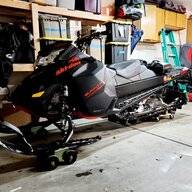