Had this thing out last saturday (last pic) with the guys who were all on new sleds and haven't had that much fun sledding in a long time. It was pretty sweet to see the old guys we passed on the trail smiling and giving me thumbs up on the old machine. Had an issues with fuel in the variflow lines causing the engine to act up a few times that I need to figure out but other than that it ran great.

I've had this XCR600 for a while now and I'm finally getting around to building it up some more. It runs on premixed fuel, has a shaved XLT head for better airflow, SLP triple pipes, airbox delete, holtzman variflow, simmons flexi-ski's, rail extensions to a 136, short tunnel extension and a lexan hood.

I had a cracked weld on one of the cans so since they were getting a bit rusty so I figured it was time to freshen them up since I had them apart. Also repacked them at the same time, not sure if its any quieter though. Used some acid and a wire wheel to clean up the exhaust and then repainted.

Next step is to mount the pro seat to the tank I just bought and then I'll try to tackle the 155 pro skid and track. Might change the bars out and I'm hoping to find something lighter for the front suspension. Eventually I'd like to ditch the running board coolers to have something that I might actually be able to clear a bit of snow from. 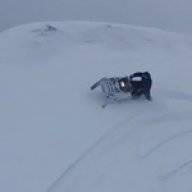 Looks fun! Love the old iron
You must log in or register to reply here.
Premium Features