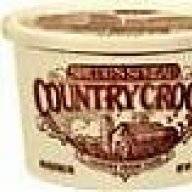 I lost a zip lock bag with two pair of gloves 1 older pair of "R U outside gloves" and a new pair of lightweight "KLIM Inversion gloves". If you happen to find them please contact Brent at 206-854-9858. We left from the Andies Prarie snopark Friday ,1/24/2020.

mc2stroke said:
I lost a zip lock bag with two pair of gloves 1 older pair of "R U outside gloves" and a new pair of lightweight "KLIM Inversion gloves". If you happen to find them please contact Brent at 206-854-9858. We left from the Andies Prarie snopark Friday ,1/24/2020.

you posted in the SW Blue Mountains section...guessing you are talking about an area in the Cascades?? 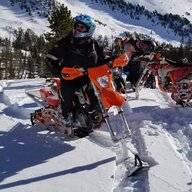 plumnuts said:
you posted in the SW Blue Mountains section...guessing you are talking about an area in the Cascades??
Click to expand...

I'm thinking the Elgin end of Tollgate on the south side of the Blue Mountains. There Is about a foot of new snow since last Sunday and is extremely wet.

Here was the snow being cleaned around the store on Thursday.

No I lost my gloves over in the tollgate area. 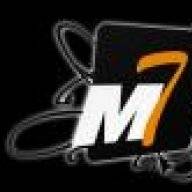 I would post from Oregon section. You may need to start a new thread. I would title it Tollgate. And/Or you could go through Facebook, Tollgate Trail-finders is the club and they have pretty active page.
I think you will have more success that way. I just lost a shovel handle last weekend and between Snowest and Facebook, it was returned.
Good luck.

Sent from my LM-G710VM using Tapatalk

Rode out of Cloverland, yes the road and parking lot were plowed. Road very icy and we chained up for the final hill into the parking area.

Below 6,000 feet it is concrete. Trails were rutted and again concrete. Above 6K the concrete was covered with 3-5 inches of powder... it was go anywhere snow.

But it was a great day... by Super Bowl time the mountains were quiet and we pretty much had the mountains to ourselves (other than some snowshoers camped at Wenatchee Guard Station)...

Had a lot of new powder at Tollgate Sunday morning. More like the 10 inch range at 5,000 feet. Dayton Club is planning fun and games for people on Saturday.

Are you going to the Vintage races this weekend Mike? I plan to head up.

FlyingW said:
Are you going to the Vintage races this weekend Mike? I plan to head up.
Click to expand...

Yes... made a bunch of changes on the Polaris TXL to try and get it to corner... and continued work on getting rid of the launch bog it has... Tonight and Thursday it is working on the Yamaha 340 as its performance really fell off in the mains last race. The Yamaha is going to get a lot of use... both junior classes, both women's classes... and probably the stock 340 fan class... two granddaughters are now the pilots... I think Janet is just going to race the Polaris...
W

Anyone know if you can make it Rose Springs? Or if there is any snow left. Rain and flooding is bad.

don't know at Rose but at the Snotel

long weekend at Priest Lake Vintage Snowmobile Oval Races... if you have never been it is worth the trip to just watch... racing is Kitty Cats to very hot rod 1985 and older full mod snowmobiles that FLY around the track... watch it live or on the big screen TV.. and wander the pits to get up close looks at the vintage race sleds... We are down in the stock classes and FINALLY got the 1980 Polaris TXL to launch and pull hard all the way down the straights... with help from some buddies (THANKS Birdman!) on Sunday the Polaris also turned LEFT... Janet was right there pushing for the lead and in turn two got hit by another racer, hard enough that it activated the tether switch and busted a hole in the hood... a little more clutch work and it should be awesome... that and adding a bunch more traction....

We got lucky in the Women's Stock 340 class and one of the granddaughter got the win... she is still excited!

Thanks man. Was worried that road had suffered damage and couldn't make it there. Head down to ride Friday didn't want a long trip for nothing. 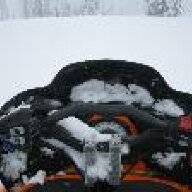 Ride Report Dayton 2/17/20 Riding with CB8 and family GREAT DAY!!! You know it is going to be a fun day when you have to chain up the truck to get into the parking lot! The road from about the forest border up to the parking lot, is exciting (lots of ice).

Unknown Cat stuck in the snow...

thanks for the GREAT DAY CB8!!

Thanks to the plumnuts clan and my wife I got an early birthday present.

Road to the snow park is "okay" and snow park is plowed. It looks like the trails have been groomed... on and off snowing hard. In the twenties temperature wise.... wind was bad.

We only went as far at the Potlatch Road as we were tuning the vintage snowmobiles for the final race next weekend in Priest Lake... but we did not get much tuning in.

So... nature was handing out life lessons...case in point. Young guy buys a $500 GMC version of a four wheel drive Surburban today... he misses the "ROAD CLOSED" sign and wanted to test the 4-wheel drive... decided he was not on a good road for the GMC so he decided to turn around... yep up to his frame stuck... No shovel, in tennis shoes, no coat, no gloves, no chains, no cell service, when we came across him he was literally trying to dig the Jimmy out with a stick. We shoveled and installed chains but no dice... this thing needed a tow... so we brought him down to the park (we were the last ones there and it is now dark)... he did not hesitate to accept a ride off the mountain... and did not turn down a sandwich and drink... (kid was staving and VERY cold... he had been stuck probably since Noon)... On the way down met a US Forest Service approved recovery service... (looks like members from the Timber Tramps) so we said our goodbyes and the kid jumped in one of their rigs to go and recover his Jimmy... probably will be expensive... poor kid, going to school and broke... as I said to him, at least you get to tell the story and not have a preacher tell the story...
Last edited: Feb 24, 2020

Fun at Priest Lake this past weekend Vintage Snowmobile racing... no podium finishes but drivers had fun

Good friend the Birdman celebrating his win in Mod 440

one of my drivers... she was excited taking a very respectable fourth place finish in one of the mains she qualified for

special thanks to CB8 for help with the clutching on the Polaris TXL 340... that little stocker is F A S T!

It was a fun weekend at Priest Lake. My crew was a little older but waiting for me to show up Friday morning for our trip north.

At least I made it to two mains on Sunday. Got to park next to Plumnuts in the pits but we staged in different areas.

Otherwise it's back to the local hills at Dayton for the Bucket Run to Godman on Saturday. See everyone there I am manning one of the stops.

Ride Report 3/8/20 Rose Springs
Road to the snow park and the snow park are plowed. Trails are groomed. Down low not a lot of snow and at this rate there will not be snow on the trails much longer unless we get another storm.

Snow is go anywhere (heck climbed the hill climb with a nineties Phazer II). 6.5 feet of snow at the marker. Thankfully there was 2-3 inches of fresh on top of the concrete or my Doo would have been doing the over heating dance.

Had the Phazer get away from the granddaughter..she was fine, but the sled went a ways down a gully before a glancing blow with a tree got it to stop... crack in the hood and it fired back up and drove it out!

Thanks NickBro for going along...
You must log in or register to reply here.
Premium Features