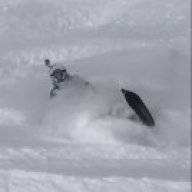 2nd owner selling my 2014 m8, just about completely updated to a 2016 Ltd, I have paperwork for all parts / work done. Spring ordering so I'm downsizing and selling this

I had to replace the lower brake side bellypan and it has yet to be wrapped, luckily it doesn't stick out that much. Clutch side panel tab broke off

Many of the parts on it were installed by the original owner but I haven't had an issue with any of them. I have 3 folders full of service and part receipts and most of the factory take-off parts. Will come with a mixing jug with some 40:1 left in it as well as some leftover oil. I don't think this sled's ever seen ethanol besides in a pinch.

She's sold
You must log in or register to reply here.
Premium Features