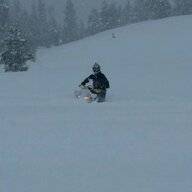 I bought a 2010 800 with a turbo,(Not my smartest decision) and the center section of the turbo is froze up. I'm not positive of the cause at this time. Potential bad oil pump.
I contacted Boondocker twice, first time was the tech department. Awesome guy to talk too. Discussed mapping and trying to figure out why it wouldn't get to RPM.
Found the problem after that. Turbo won't spin.
Called boondocker, talked to sales/parts. Told the guy I had 1178 miles on this sled and He told me that was a lot of miles on a sled. I laughed. I found out that they no longer support the turbo. The oil pump is their design and they can't help. None available, quit producing in 2012. Also the center section is 650-800$
2 years of support on a product seems a bit short. 1178 miles seems like a short life span as well. It is a 10 year old sled that I have no clue how it was maintained. However, when you call a company and they seem surprised it lasted that long, I'm a bit shocked.
It gets better. He did tell me I can buy a new system for it. 5-6k for something that only gets a couple years of support and only designed to lat 1200(per his comment) miles at most. I'm sure there are a lot of people that have got a lot more miles on these turbos. I'm not looking for a debate. If you are reading this and have a boondocker or other brand turbo that has reached more than 1200 miles you should tell Boondocker so they are better informed.
Done with the rant.
Anyone know where to send a ball bearing turbo for new seals and bearing that isn't boondocker. I tried a place in Salt lake that told me garrett is the only one and can't tell me the cost until they get it. Most likely 800 plus shipping. Not likely going to happen for the cost of this sled. Cheap Boondocker for sale soon. lol

that is what I used on mine.
Boost-it used that one as well.
the small boondicker one was a pos IMO.
my BD pump died and almost killed the turbo.
But I replaced the turbo with used one anyway.

New top end already, jugs, pistons. Blows my mind that it needs it already.
Thanks for the pump idea. I found some like this but I'm skeptical about using a fuel pump. How long has it been in use?

well as far the Dragon 800 goes. Do some reading. the 2010 was the best.
same thickness of cyl skirts as a 11-12 pro. fix kits from mtntk or wiseco and others have great reviews.

turboed 800 dragons often faired quite well from what I've read.

I've had that pump running for 120hrs.
put the used turbo on then. it's still working.
N

I played the turbo dragon game. Really $650 isnt bad for what you will find for a good ball bearing turbo center. $800 seems a bit much. I think you could find a complete turbo for that much. You could put on a cheaper bushing style turbo but in my experience not worth the hassel. I blew up two of the bushing styles. Both oil pump related.

Ball bearing turbos dont need much oil. If you really wanted to you could convert it to run off the oil pump of the sled. Fairly simple if I remeber right.

If money is an issue my best suggestion is put it back to stock and ride it.

If money was the issue I wouldn't be sledding. Lol I just hate throwing it away if it's only going to last 1 season.
I'm definitely not trusting the bd oil pump. I would change it out. If it was reliable I would think boondocker would still be using it.
I'm apprehensive to use 2 stroke oil on a turbo bearing. It is an easy solution just not sure on reliability.
I'm not a big fan of ruining my riding buddies days breaking down. Lol

most of the turbo kits out there are running two-stroke oil in the turbo.
Ski-doo might be using it in their factory turbo as well.
N

sledmasterminion said:
I'm not a big fan of ruining my riding buddies days breaking down. Lol
Click to expand...

Just turn back now ha. I broke down more than I rode when I had my turbo polaris. Some of it was turbo related some of it was polaris 800 issues. I went thru some voltage regulators, tps sensors, egt sensors, fuel filters, pistons, pipes and a chaincase. All probably within 200 miles of me riding it.

I wouldnt worry one bit about running 2 stroke oil in it. Makes it a much cleaner set up.

My best advise is just run good gas in it and keep an eye on piston skirt wear. But really if you get the turbo fixed and if it has a good set of pistons it should last awhile.(more than 1100 miles) 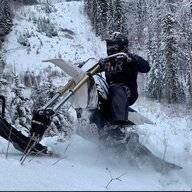 Your turbo should have a tag on it and with some research you can rebuild it. i just rebuilt a used BD kit i got for my 12 pro using this kit https://www.ebay.ca/itm/Ceramic-Dua...e=STRK:MEBIDX:IT&_trksid=p2057872.m2749.l2649 not sure what turbo you have tho. You can update and delete the oil tank and electric pump and t off the oil injection pump. mtntk has a kit i believe but theirs lots of info online about sourcing everything yourself. once your into the performance side of things like this longevity isn't the goal its power

My 2012 doesn't have an oil pump. Someone installed a kit with updates. Post pics of the sled and set up if you can. Nothing wrong with a dragon chassis, hell you could toss on some axys spindles and do some tunnel work and still have a capable reliable sled. Gtx2867r is would be my recommendation.

To be specific. You mean the oil pump that circulates oil through the turbo? I got the impression you had a retrofitted kit pulling oil from the stock oil resivoir.