I got there today and handlebars were not connected to skis or steering linkage. From the looks of it, it looks like there is a washer/nut missing from the linkage to the bottom of the steering column. If so, how would one get the linkage to connect it up? It's directly under the engine with only around .75" of space to get to it... can I remove the pan under the engine (basically drill out the pop rivets, etc) to access the steering components? I sure hope the engine doesn't need to come out to put a single nut on the linkage?

Here is a video I took showing the two parts disconnected:
https://photos.app.goo.gl/rJhOmgI57jvJu8Xw2

Sorry for terrible angles, but I just can't get a great angle. First part of the video is the steering column moving freely... second part was me moving the ski linkage. There is a hole on far side (you can't see it in video) on the steering column knuckle that has a perfectly size hole for that linkage bolt. Seems to be too convenient not to mate up?

A bit of background on the sled (after I just said long story short above... ). The seller was a landlord who was tired of looking after a ex tenants snowmobile for the past 3 years. She'd been asking him to pick it up and he was blowing her off and basically abandoned it. She said "I just want it gone!" ... I asked if it ran and she said "Yes, my son started last year but noticed oil under the hood, so didn't want to run it long." Sure enough, it had some oil under the hood, but the tank was still full, so I'm guessing the previous owner was just shaky when filling because it seems like it's in decent shape. All fluids are where they should be (coolant, crank case, 2 cycle oil) The crank moves fine and all seems to be in good order other than a broken pull starter cord and steering.

I bought it as a project and figured worse comes to worse, it's seized up and I'd be a be able to do my first bottom to top engine rebuild! So far it does NOT look like it's seized up at all, but the previous owner didn't know how to fix the steering, so just stopped riding it. Hopefully this is a win for me?

Edit: so I'm sure this is the correct connection. Anyone know the size of nut I'd need? Looks very finely threaded... Would a Teflon but be suitable?
Last edited: Nov 20, 2017

The center bellypan section (#6 below) should come off with just some screws, no rivets. Unless someone put it on wrong... 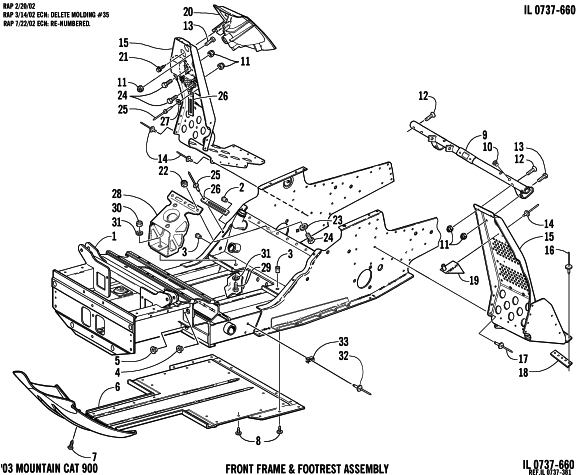 You can get to that bolt from underneath, may even find the original nut floating around down there. (#16 below) 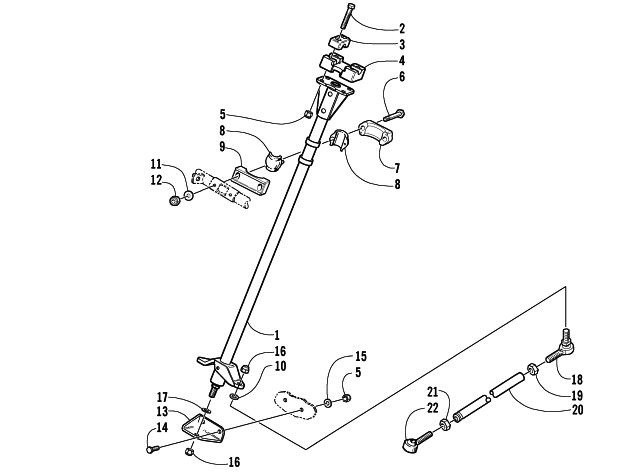 Sweet. It has definitely been taken off before... as there are 4 normal looking screws in it and the rest of the 20 or so are pop rivets.

Guess I'll start drilling em out and get to work!

EDIT: Ok, so it appears to have a second thicker skid plate attached to the center belly pan. This is the plate that was pop riveted on... I drilled through all rivets and removed all screws in the center bellypan to find exact what I needed and as you described Idcatman3. Just need to buy a nut tomorrow and I should be good to go! Any reason I can't use a teflon nut? From what I can tell the factory nuts are sort of... crimped on. I guess teflon is better than nothing.
Last edited: Nov 21, 2017 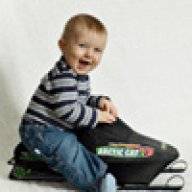 If you're talking about a self-locking Teflon nut you should be ok. The Arctic Cat nut is self-locking too, just a different type.
J

sprockethead said:
If you're talking about a self-locking Teflon nut you should be ok. The Arctic Cat nut is self-locking too, just a different type.
Click to expand...

Yep, nylon locking nut. I put one on tonight and it seems like it'll work just fine. I was worried about the height of the nut and whether it was going to grip the threads (as they are fairly short). I did in fact find the factory nut, but didn't want to put it back on as it's already come off once.

I'm thinking now that I should have probably put some thread sealant on them... perhaps a red to make sure it doesn't back off again.

Thanks for the help.
C

You may want to use self tappers upon reassembly... I have to tighten up that steering nut annually as it will loosen with aggressive riding and yanking on the steering stem... Good Luck! Awesome sleds.
J

Chief3Jeeps said:
You may want to use self tappers upon reassembly... I have to tighten up that steering nut annually as it will loosen with aggressive riding and yanking on the steering stem... Good Luck! Awesome sleds.
Click to expand...

I ended up putting locktite red with nylon locking nut on it. Haven't had a chance to take it out yet, but hoping it'll be fine. I'll take off the skid plates next summer and check it out.

Thanks!
You must log in or register to reply here.
Premium Features