You are using an out of date browser. It may not display this or other websites correctly.
You should upgrade or use an alternative browser.
A

So one cylinder reads 90psi and the other is at 135psi... I can get the sled to start and run, but I have to get on the gas for a little bit... Any ideas what Im going to need to do to get this thing running right? Is it worth me keeping? I am getting the sled for $600.. Just debating if i save my money and buy another sled or hope its ok, rip the heads off and hope its nothing major.

I already have another RMK, just wondering if this is something I should tackle or pass on as it could be a money pit.

Seat is good, track and skid is good, hood is good... 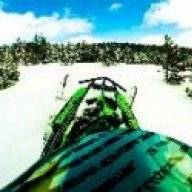 Just put new pistons and rings in it. When it's apart check for play in the lower end. Since it will run it isn't completely internally grenaded. If you don't have a manual get one and follow the torque procedure religiously. I failed doing that the first time and blew my gaskets a mile from the parking lot. The 700 is a really good motor and if the rest of the sled is in good shape I would hang on to it. I have the same sled with some mods and love it. Parts are cheap and plentiful. If you have any more questions pm me.
A

Here is a picture of the other issue.... Im thinking the bulk head may have an issue?

That ski is bent way to one side... No idea what would even cause that.. He has another trailing arm, but I looked it over and the current trailing arm looked fine.

The tub and the hood don't seem like they line up for whatever reason. There is a good 3" gap at front. The sides of the hood go into the grooves fine... The hood looks fine/no cracks etc.. The seat is good, the track and skid look good, the NON PTO side of the sled looks fine... Just not sure if it was rolled and something else worse is going on. I couldn't look inside the bulk head and find any major dents etc internally, so not sure what's up.

Looks like it has some nice shocks on it though.
A

Down side is trailing arms for a Gen II are hard to come by...

If I could find a better deal on some trailing arms I would feel much more comfortable.

Not at all. Look on ebay. That's where I buy most of my stuff for my sled.

I think edge chassis ones for too don't quote me on that but I think they just don't have the ski stop on the bottom. I bought repairable tubular ones for my sled. Way lighter.

I bought my two for 80 bucks for the pair 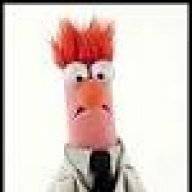 SPI pistons aren't nearly that much...

You might be able to just rering/piston it... but if the cylinder is hurt then you are in to it another couple of hundred bucks at least.

Hard to tell from the pictures, but I'm betting it took a hit in the front left. He replaced the bumper, but the support structure behind it is probably bent including the hood hinges causing the hood to be aligned wrong.

As for the ski, I'm betting he bent the lower radius rod and either bought the wrong new one or used one that is too long and it is pushing the bottom of the ski out. The mounting saddle might also be bent/twisted. I'd check that ski spindle to see if it is bent too.

You can get SPI made aftermarket trailing arms as well. I have a local guy I buy them from and they are 1/2 of OEM.

I don't think Fox made shocks for that sled. that might be part of the problem too. If he threw longer shocks under there and shortened the radius rods it'll mess up the ski stance quite a bit. The 700 is a great motor though i love mine. if you could save it with new rings i'd go for it. But for the hood if the hinges are bent you can fix it right or just throw on a couple extra straps and ditch the hinge. Really what its gonna come down to is the bulkhead. if thats tweaked then its probably not worth it. Thats a lot of time and money to swap in a new one.
A

Thanks for the input. Yeah, I can get an EDGE RMK around these parts for $1600, running and in good condition. If I have to put in another $800-900 for a gen 2 chassis its just not worth my time and effort. The front support that the hood hinges on I believe was different, the ski was in bad shape, nearly all the radius rods were bent (on both sides), he said on lakes the sled eats belts, the track, skid, hood and seat were about the only thing that looked decent on the sled.

He had a bunch of electrical lines everywhere, the twin pipes were heating up the radiator hoses and causing a leak before he said.... Just a lot of stuff half way done right is what it looked like to me.

I offered him $400 or told him he might have better luck parting it out.

Yeah it sounds like you made the right decision to pass. I personally have a thing for the gen 2s. Not a huge fan of the edge chassis based primarily on looks lol. I think I'll end up buying a dragon next. If you have any other questions. Shoot. I work night shift now so I'm up all night and sleep during the day fyi
S

not great motors imo. powerful sure. pull the recoil cover, check the water pump belt, then pull that belt and feel how the water pump spins.... the whole thing prob needs a re-build..
gen 2 was the most boat like hood of them all too :face-icon-small-win

I had a 99 600 and it was alright. It was mint and showroom quality and i paid 1000 for it and that was over six years ago so I agree that it seems high. And a six hundred might not be what you are looking for I don't know that for sure though. And I sold that 600 for 600 bucks a couple years ago fyi. 136 is pretty short anywhere these days that's why I opted for the 159 on my 01
A

Well, I decided to buy the sled. It is in need of some some serious TLC, but I wanted a motorsports project this winter... I was looking around at other like sleds and they just wanted way too much with blown motors. This one at least runs (not very well), but it does run. It has a few expensive parts like a westach EGT gauge, twin pipes, risers, different bars etc...

The front of the nose is smashed, that's why the hood doesn't align. So I need a new front bracket.

It's gonna need a pair of trailing arms and other goodies to get it to "like new" condition suspension wise, but the Fox shocks are a nice upgrade.

I figure I will tear down the motor and go from there.

My little triple xlt seems like a beast compared to this dog... Hopefully she doesn't set me back too much.
You must log in or register to reply here.